If we ever needed a reminder that we are all connected, the Amazon Rainforest provides. With every breath you take, 20% of that air is created by the Amazon.  It holds 20% of the world’s fresh water and 40% of the world’s tropical forests. It plays a critical role in stabilizing the climate. The weather, ocean tides and planetary biodiversity are all significantly impacted by the health of the Amazon basin.

Bolsonaro has also declared war on Indigenous peoples calling them “minorities that must integrate,” rather acknowledge them as constitutionally recognized keepers of ancestral knowledge. Indigenous peoples maintain 80% of the world’s remaining intact forests and biodiversity. And while Bolsonaro promotes conspiracy theories suggesting environmental NGOs are setting the Amazon ablaze, it is Bolsonaro’s pro-agriculture policies that are now being linked to the country’s 73,000 fires. Amazon Watch’s Chris Porier suggests that the president’s message allows farmers and ranchers “to commit arson with wanton impunity.” With every clear-cut swath, Indigenous peoples are being forced from their traditional lands. Lush rainforest is then replaced by cattle, pastures, dry riverbeds or oil infrastructure—changing not only the local landscape but global weather while escalating rapid species extinction and dramatic rises in CO2 levels. 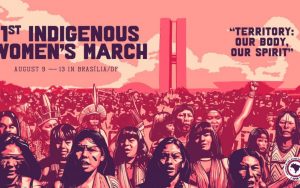 On August 13th of this year, the first ever Indigenous Women’s March in Brazil brought over 2,500 Indigenous women from across the country together to converge on the capital alongside thousands more as part of the Marcha das Margaridas. Indigenous women courageously called out the Bolsonaro government and other actors who have openly threatened the lives of Indigenous activists for speaking out. Osprey Orielle Lake, Executive Director of the Women’s Earth and Climate Action Network (WECAN) International led a delegation to participate, saying “As threats increase, women land defenders are harmed first and worst. This is a critical time to stand with courageous Indigenous women leaders in Brazil who are fighting everyday to protect human rights, forests, water, climate, communities and future generations.”

No matter where we live we cannot look away and we cannot stand idly by. We must act. The world needs victories in the Amazon. Even if we assume international civil society has little sway with the Bolsonaro administration, we can and must stand in solidarity and action with true forest protectors. Defending indigenous rights, territories, the rights of living forests and flowing rivers are among the most effective solutions to climate change.

There are some rays of hope happening for the protection of the Amazon basin and throughout Latin America. Those victories are being secured by Indigenous protectors, rights of nature advocates, and youth.

WINS for the Amazon and Indigenous peoples

This year Ecuadorian Courts ruled in favor of the Waorani tribe’s ancestral land rights threatened by oil drilling in the Amazon. The August 2019 court ruling stopped 180,000 hectares that would have been opened for auction to oil companies. Intercontinental Cry recently reported that, “The now final verdict also jeopardizes the contemplated auctioning of 16 oil blocks that cover over 7 million acres of indigenous territory by providing an invaluable legal precedent for other indigenous nations across the Ecuadorian Amazon.”

“This victory is for my ancestors. It’s for our forest and future generations. And it’s for the whole world,” says Waorani Nation warrior, Nemonte Nenquimo

In 2016 in Colombia, following 5 decades of internal war that left more than 200,000 people dead, a peace agreement was signed between the government and the Revolutionary Armed Forces of Colombia (FARC). Youth across the country recognized they would be the first generation to live without war and began to to ask the question “what would it look like to make peace with nature?”

A group of youth from across the country began researching drivers of climate change in Colombia, and were shocked to find out that the primary source of greenhouse gasses was occurring in the Amazon—not the cities.”During the war it was difficult to access the Amazon for profit…but that changed quickly.” says Gabriela Eslava, a human rights lawyer lawyer who at the age of 24 participated in the research project. “But in the first year following the peace agreement, greenhouse gasses in the Amazon increased 44%. We decided as youth we would take legal action to protect the Amazon and the rights of future generations.”

Twenty-five youth aged 7-26, including Gabriela Eslava who was both a plaintiff and a lawyer, took their climate case all the way to the Colombian Supreme Court. In 2018 the court recognized the “personhood” rights of Amazon rainforest. “One of the mechanisms we have in Colombia is called a ‘tutela’ action.” says Gabriela. Tutela is a guardianship mechanism designed to protect fundamental rights that are under threat or have been violated—even those not explicitly spelled out in the constitution. Rights of nature was not part of Colombian law, and it was not specifically part of the plaintiff’s case.

The youth asked the judges to consider that everything was connected. “For example, when you cut down trees in the Amazon, you are also affecting the water cycle,” says Gabriela.  “The rain produced in the Amazon provides 80% of the water we drink in Bogota.”

The Colombian constitution states that there is a duty to act in solidarity with others. “We asked the judge to consider solidarity with other  human beings with whom we share the planet today, with future generations, and with other sentient beings who inhabit this planet.” The Supreme Court decided that based on the solidarity principle, they needed to define “the other sentient beings” in the case. As Gabriela explains, “For the judge that ‘other’ was the Amazon. He declared the Amazon as the subject of rights to be maintained, protected, conserved, and restored.”

Compared to other legal actions, a “tutela” does not require a lawyer; the procedures are simple and the law requires an expeditious process—in Colombia, that means just 10 days before the judge must respond. Implementation has not been so easy, and not unexpectedly has been fraught with corruption. Despite the challenges of implementation, the Colombian case has broad and exciting implications for rights of nature throughout Latin America, as many countries have a version of the tutela model.

The case of TIPNIS and the protection of Indigenous territory and the Bolivian Amazon: TIPNIS is an area that is triply protected—as a national park, an Indigenous territory, and the subject of rights of nature. The 32 Indigenous tribes of this remote area (the size of Puerto Rico) have always lived in harmony with the Amazon,  but their way of life has become threatened by a massive road project.  If completed, the “assassin’s road” through the Amazon brings with it the cocaine drug trade and oil exploration. If completed, the road would decimate 65% of the biodiversity in this part of the Amazon, and displace thousands of TIPNIS Indigenous protectors. Through recent decrees from Bolivian President Evo Morales, once considered a champion of Indigenous peoples and the rights of nature, the national park status and indigenous rights have been effectively rescinded for TIPNIS. But owing to political pressure at home and abroad, the rights of nature remains the last protection against the governments plans for development.  Some of this pressure has come at the request of TIPNIS leaders asking for  international support from rights of nature advocates including Movement Rights, GARN and other international advocates. Continued pressure will be needed to keep the road from moving forward.

What’s Next for Latin America and Rights of Nature?

In August 2019, Movement Rights and the Global Alliance for the Rights of Nature (GARN) were in Bogota, Colombia for the 3rd International Forum for Mother Earth’s Rights.  During these four days, researchers, activists, environmental lawyers, artists, representatives of indigenous peoples, and universities, gathered from throughout the Americas to find effective ways to protect life on Earth. “It is very important to promote a culture of care of Mother Earth that is so necessary in these days,” Juan Sebastian Acosta, Organizing Committee’s President, explained. “We humbly aspire to promote consciousness, and a shift of perspectives…to present solid arguments from a scientific point of view, and, ethically, artistically and philosophically.”

“It was a wonderful and important gathering of defenders of Nature throughout Latin America,” says Environmental lawyer from Argentina, Enrique Viale.  “It is important to consolidate the Latin American alliance because this is the region of the planet where more social leaders are killed for protecting Mother Earth and her communities than anywhere else.” (Click here for photos and videos from the Forum.)

Natalia Green, Ecuadorian coordinator of the Global Alliance for the Rights of Nature agrees.  “Some countries like Colombia, Mexico, Brazil and Chile and Ecuador have their own Rights of Nature movement and collective platforms,” she says.  “There are already hundreds of organizations throughout the region.” The day after the close of the Bogota Forum, Natalia helped organize a planning meeting to create the first GARN Latin American Hub for the Rights of Nature to bring all these platforms together.

“It was a fantastic meeting following the Forum and there was so much enthusiasm to bring together all of this energy,” says Natalia. “Most important is to map all of the existing groups including so many who were not able to come to Bogota—to begin to organize activities together, including the upcoming Rights of Nature tribunal in Chile, and to link with the broader climate justice movement.”  GARN is hosting the next international Rights of Nature Tribunal in December 2019 in Chile to coincide with the UN COP 25 climate negotiations. The Tribunal will focus primarily on climate and in particular will focus on bringing cases from the Amazon.

There are a lot of ways to take action moving forward. 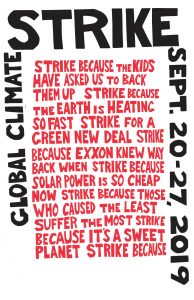 JOIN THE CLIMATE STRIKE This September (20-27), millions of us will walk out of our workplaces and homes to join young climate strikers on the streets and demand an end to the age of fossil fuels. Click here to get engaged and learn about actions where you live.

JOIN BRASIL SOLIDARITY NETWORK’S MONTHLY ACTION at the Brazilian Consulate in San Francisco.  The next action is August 30. Don’t live in San Francisco?  Start a sister chapter in your community by reaching out to BSN via Facebook.

SUPPORT YOUTH ACTING ON CLIMATE COLONIZATION  As Gabriela Eslava says, “We need more people fighting for those who have no voice. Youth are discovering new tools—being young we’re not afraid of being creative.” The Colombian climate youth took inspiration from Our Children’s Trust climate case in the US, comprised of mostly indigenous youth who, using a colonization lens, have sued the Federal government.

LEARN ABOUT THE AMAZON FROM INDIGENOUS PROTECTORS Understand the role that we – who may feel distant from this rainforest – have in its deforestation and get to know the perspectives of Indigenous land defenders.”We don’t have to accept the destruction of our rights,” Indigenous leader Sônia Guajajara told crowds at the recent Women’s March.  WECAN live-streamed from the streets of Brasilia, you can watch here.

AVOID SHOPPING FROM THE DESTRUCTION OF THE AMAZON We all know that buying “green” won’t save the planet, but at the bare minimum you can make sure that what’s in your shopping cart doesn’t come from clear-cutting the Amazon. Agriculture represents 70% of the destruction of the rainforest. Some products are sustainable or Fair Trade, but mostly, not so much. Read the labels. Likely culprits to look for include cane sugar and beef.  “If you’re feeling empowered,” says Brasil Solidarity Network coordinator María Xiomára Dorsey, “if you see a Brazilian product at your favorite store, ask them to contact the company and tell them they won’t be carrying those products. Or contact the company yourself.”