Casey Camp Horinek speaks at a protest that was part of the Frontline Oil and Gas conference in Ponca City, Oklahoma.

“Was that an earthquake?”

As rivers swelled, floods surged, the earth shook, and tornadoes whipped across Oklahoma—more than 200 Indigenous, POC and frontline leaders from across Turtle Island convened in the state’s oil and gas epicenter. Surrounded by fracking and injection wells, with 2,000 miles of pipelines running beneath our feet, we were on Ponca tribal land for the first Frontline Oil and Gas (FOG) conference from May 16 to 18, 2019.

More than just another conference, what was happening inside was just as powerful as Mother Earth’s rage through the plains. What distinguished this event from other critical gathering spaces for the climate justice movement was rooted in the Ponca Tribe’s own story of environmental genocide, and their resilience and leadership in defending Mother Earth as seen in this video featuring Mekasi Camp.

It would have been easier to hold the conference somewhere else. People who fund these gatherings tend to shy away from “sacrifice zones” like Ponca City. Hosting it in Tulsa or Oklahoma City would have made logistics easier; it is an hour and a half away from these two cities with no busses, shuttles or train connections. But this wasn’t about just a venue to gather. This was about the Ponca Tribe of Indians inviting the climate justice movement to their lands, and connecting at the heart to share stories and strategies from the Arctic Circle to the Bayous of Louisiana.

Being guests of the Ponca Nation we were welcomed with love and ceremony. Children were running around and part of the activities. For all participants our time together was powerful. And personal.  Critical to shifting the dialogue and the tone of the event, the vast majority of those at the conference identified as Indigenous and people of color.

Bryan Parras (Sierra Club, TEJAS), an Indigenous frontline leader from Houston Texas, helped shape the conference.  As he said, “It is here that the Ponca Nation made steps to recognize the rights of nature and seed a new future for these lands—one that honors and respects Mother Earth. The Ponca stand at the proverbial crossroads and have asked us to join them on their journey towards reconciliation, balance, and healing.” All frontline defenders shared their struggles and the reasons for hope from their territories and communities. Click here to view photo gallery of the FOG conference.

What we Learned About Leadership 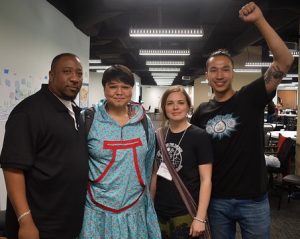 It was an interesting experience for many of the European Americans attending the conference to be in the minority.  And, for those who arrived with an intellectual understanding of how to be a good ally to people of color, many of them had a new emotional connection which changed the way they view their work moving forward. One of those forever changed was Cara Ellis with Extinction Rebellion SF Bay, who told us, “Indigenous peoples are the protectors of the land – their wisdom is rooted in our fundamental connection to the natural world. Never before in human history have we had such an opportunity to finally acknowledge our need for such wisdom – before it’s too late. Going forward, where I understood allyship as an idea in my head, I now understand this with all my heart: it is not for new grassroots movements like Extinction Rebellion to invite our frontline allies to dinner at our table; it is for us to come to theirs, and to politely ask what we can bring.”

The youth contingent, 99% percent of whom were Indigenous, astounded conference organizers during the “River of Time” exercise.  A roll of paper about 15’ long was taped to the wall with an illustration of a river at the bottom. The river was sectioned into decades between 2019 and 2099. Attendees were invited to join into groups by age and instructed to think through what we need to do decade by decade to get to the future we seek.  The River of Time  traveled from the present moment of devastation through the decades to reach a safe, clean, healthy future by 2099. These “imaginings” were to be written on post-its and placed on the River of Time. Some of the older participants seemed challenged by the exercise, contributing a small number of ideas to the River. The only group to thoroughly imagine the survivable future and how to get there was the youth group who finished the exercise by passionately addressing the entire group and sharing their visions for change.

At the close of the workshops, in between storms, we marched in red to two actions, the first at the Conoco Phillips Ponca City headquarters, and then to a Murdered and Missing Indigenous Women Billboard that was erected to coincide with the FOG conference.

Oklahomans recently learned that the state ranks tenth in the country for murdered and missing indigenous women (MMIW) cases. “Man camps” that follow fossil-fuel operations have been described as “the nitroglycerin” for sex-trafficking that is central to the MMIW tragedy.  The national billboard campaign was initiated by the tribal alliance of the Rocky Mountain Tribal Leaders Council (RMTLC), the Great Plains Tribal Chairman’s Association (GPTCA), and the Global Indigenous Council (GIC). The billboard in Ponca City was part of a collaboration between the billboard campaign and the Ponca Tribe of Oklahoma, to raise the issue in Oklahoma and to spur action on statewide and federal legislation. 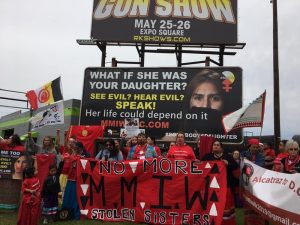 Arriving at the billboard,  participants were shocked to see another billboard advertising a gun show at the same site. A prophetic coincidence, it set the stage for the moving, angry and tearful testimony that was held during the rally.As Bryan Parras remarked, “We marched for a future free from extraction and exploitation. We recognize the connection between fossil fuel extraction and violence against our Indigenous women, children and humanity itself.  We vow to stand up, speak up and fight back, and we vow to do this together.”

Returning to  the conference site, it was time for a release. The Ponca Tribe hosted a traditional dinner and exhibition dance, where participants were invited to join in. As with all conferences, the burning question is…so whats next?

During and shortly after the FOG conference in Ponca City, there were 500 tornadoes in the US in 30 days. The climate clock is ticking down. Everyday the news is horrifying. Even the 15-year timeline given by the famous UN report on Climate Change is today being called “optimistic”. We haven’t a moment to lose. We all must act. Millions will need to stand in the streets, block the corporate machinery, risk arrest, and more.

Alongside all of those necessary direct actions to come, we need to simultaneously reconnect humankind with the rest of the Earth community, or we simply won’t win.

Intertribal Rights of  Nature (IRON) forums, Community Rights trainings, tribunals, a FOG conference and more have been organized by Movement Rights over the last five years (as an organization we are 5 years old now). Movement Rights’ work is the culmination of the vision we—as just two women—hold; our obligation to stand side by side and share the Rights of Nature on behalf of Mother Earth. Not as ‘the answer’ but as an important part of the journey on the River of Time, listening to the lessons of our ancestors on how to live in balance, while creating real system change.

Together, we are working with tribal nations and communities to align human laws with the laws of Earth. We see this process as a way forward toward clean air, water, soil and a safe, survivable future. We understand that the harms to the sacred system of life have been caused by the human violations to the natural laws of Mother Earth—of which humanity is simply one part.  Without traditional ecological knowledge, Indigenous cosmology and Original Instructions, the Rights of Nature would be at best, merely a western legal tool to confront corporate rule.  That’s great, but there’s so much more. We believe that bringing this work to life is about ensuring this framework lies in the hands of Indigenous people: that it is part of their history and next steps for the original instructions to manifest in the world we live in today. Movement Rights is bringing these concepts to life by inviting tribal nations and Indigenous people to understand that the Rights of Nature/Mother Earth comes not from the same legal tradition that enabled their genocide, but from their own Original Instructions given to them at the beginning of time.  It is about bringing that understanding to western law on Turtle Island.

The day after the conference, as 200 participants made their way back to their own frontlines at home, a small circle of Indigenous people stayed on to participate in the Intertribal Rights of Nature (IRON) Forum. In that room, we witnessed a shift. As we listened to meetings being organized and steps being taken, we saw that RoN is moving forward in new ways, in Indigenous hands. We are so empowered and inspired by seeing this vision we have held moving forward in ways that we could have only imagined. 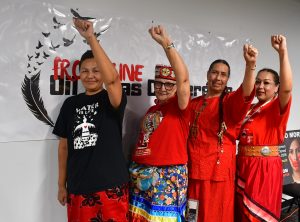 Rights of Nature is a concept that is proving to be a bridge between the harms of the industrialized world and a future where the system of life is protected and restored by new laws based on ancient truths. About human responsibilities to the ecosystems that give us life. It is a vision whose time has come and the women of Movement Rights are excited to see that it is a contagious concept sweeping across the world, and across Turtle Island. On the drive home from Ponca City to the Bay Area, we celebrated a little.  Yes, it was a conference and a meeting, a coming together of frontline strategies. That alone won’t change the world. But just like FOG and IRON, there is strength behind what you can’t see in the mist right in front of you. And like Movement Rights co-founders, together we’re all a lot stronger than we look.

A special note of thanks

The Frontline Oil & Gas Conference was proudly sponsored by the following partners:

Nearly 250 people registered for the FOG Conference. A special thank you to the numerous groups represented by attendees at the Frontline Oil & Gas Conference. (Apologies if we are forgetting anyone, and a reminder that by attending, your organization does not necessarily endorse the conference or all of the views represented during the conference.) We were: