Catastrophic climate disruption is the direct result of human activities pushing beyond the livable limits of the natural world. A core factor in the current incongruent human/nature relationship is that the dominant, over-extractive global economy fails to sustain and regenerate life. So-called “market-based solutions” at the center of most climate responses rely on two false assumptions: 1) that we can solve climate change by putting a price tag on nature’s vital processes and then offset polluting activities; and 2) that we can continue to perpetuate an economic system based on endless extraction and material production on a finite planet.

If we are to exist and even thrive as a species and hopefully return to a healthy and interconnected relationship with the natural world, we will need to redefine “wealth” away from financial accumulation towards regeneration and well-being. To support such a cultural shift will require a new body of human law to codify and implement these values. Rights of Nature provides such an alternative framework, and it is quickly gaining favor, with laws expressed in 23 countries in the last 15 years and many others under consideration.

This was not just a conference around  frontline defenders, it was designed by frontline defenders for frontline defenders.
As rivers swelled, floods surged, the earth shook, and tornadoes whipped across Oklahoma—more than 200 Indigenous, POC and frontline leaders from across Turtle Island convened in the state’s oil and gas epicenter. Surrounded by fracking and injection wells, with 2,000 miles of pipelines running beneath our feet, we were on Ponca tribal land for the first Frontline Oil and Gas (FOG) conference from May 16 to 18, 2019. More than just another conference, what was happening inside was just as powerful as Mother Earth’s rage through the plains. What distinguished this event from other critical gathering spaces for the climate justice movement was rooted in the Ponca Tribe’s own story of environmental genocide, their resilience and leadership in defending Mother Earth as seen in this video featuring Mekasi Camp.
Articles & publications:
Photo gallery from the FOG conference: https://movementrights.smugmug.com/FOGcon-Selected/
FB page: https://www.facebook.com/Frontline-Oil-Gas-Conference-1053946598126891/
The Frontline Oil & Gas Conference was proudly sponsored by the following partners:

The Ponca Tribe of Indians of Oklahoma • Movement Rights • Stop the Frack Attack • Indigenous Environmental Network • Seventh Generation Fund • 350.org • Sierra Club • Stand.Earth • LUSH • Rainforest Action Network • Wallace Global Fund • Patagonia Foundation • Global Greengrants Fund • Earthworks • Friends of the Earth • NRDC • Earth Guardians • OilChange International • Earth Justice • Piper Fund • Oklahoma Chapter of the Sierra Club • Women’s Earth and Climate Action Network • Center for Biological Diversity • Greenpeace • Na’ah Illahee Fund • Thank you to the 1000 Grandmothers Bay Area and all the individuals who supported the FOG Conference Scholarship Fund. Nearly 250 people registered for the FOG Conference. A special thank you to the numerous groups represented by attendees at the Frontline Oil & Gas Conference. (Apologies if we are forgetting anyone, and a reminder that by attending, your organization does not necessarily endorse the conference or all of the views represented during the conference.)

This was not just a conference around  frontline defenders, it was designed by frontline defenders for frontline defenders.
As rivers swelled, floods surged, the earth shook, and tornadoes whipped across Oklahoma—more than 200 Indigenous, POC and frontline leaders from across Turtle Island convened in the state’s oil and gas epicenter. Surrounded by fracking and injection wells, with 2,000 miles of pipelines running beneath our feet, we were on Ponca tribal land for the first Frontline Oil and Gas (FOG) conference from May 16 to 18, 2019. More than just another conference, what was happening inside was just as powerful as Mother Earth’s rage through the plains. What distinguished this event from other critical gathering spaces for the climate justice movement was rooted in the Ponca Tribe’s own story of environmental genocide, their resilience and leadership in defending Mother Earth as seen in this video featuring Mekasi Camp. 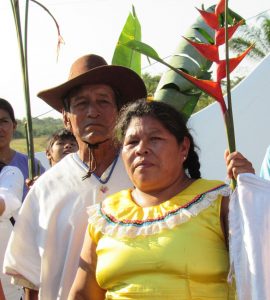 Official Report Of The Commission Of The International Court Of Natural Rights In The Case: Indigenous Territory And Isiboro Sécure National Park (Tipnis), Bolivia

WHAT IS THE INTERNATIONAL TRIBUNAL FOR THE RIGHTS OF NATURE?

The Court is an body of ethical nature that aims to investigate and rule on cases of violations of the Rights of Nature, or for the breach of responsibilities by international organizations, States, private or public legal entities or individuals, in application of what is established in the Universal Declaration of the Rights of Mother Earth approved in 2010, during the World Peoples Conference on Climate Change and the Rights of Mother Earth, held in Tiquipaya, Cochabamba, Bolivia. Likewise, in the case of Universal Rights, those legal bodies will be incorporated, such as those that derive from the Constitution of the Republic of Ecuador, approved in a plebiscite by the Ecuadorian people in 2008.

The Court is made up of judges and judges of recognized ethical authority and commitment to Mother Earth named by defenders of Mother Earth from different parts of the world. 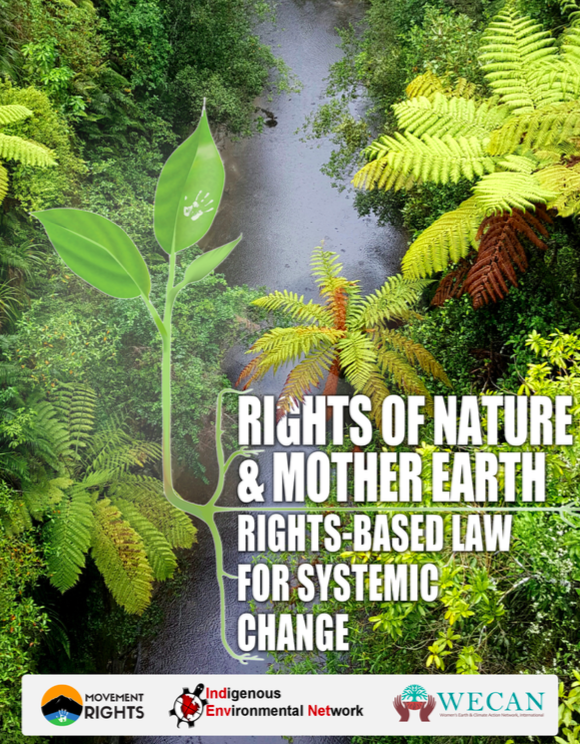 With Contributions by Over a Dozen Rights of Nature Leaders

This report explores not just the idea of a radical shift toward recognizing rights of ecosystems (and our responsibilities to the Earth) but includes global examples from around the world where these new laws are taking root. In the last year alone, New Zealand and India have recognized rivers as rights-bearing en es that now “own” themselves. They join the fast-growing list of 7 countries and dozens of local communities that are finding the only way forward to protect human communities is to shift our hearts, minds and legal frameworks to align with natural law. We can choose to shift now, while there is s ll me to escape the worst devastation of climate chaos. Failing that, we must remember Mother Earth does not negotiate. 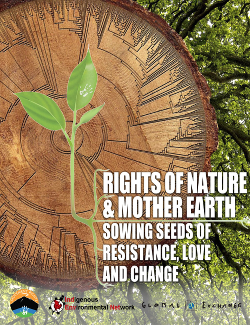 The modern world is removed from nature. A world without a living knowledge of its spiritual relationship and responsibilities to the creative principles of the natural laws of Mother Earth, results in our planet become property, without a soul, to be owned and sold. Nearly everywhere, the legal paradigm of laws protects the ownership of nature, so it is not surprising that the UN climate negotiations are rooted in the continued privatization of ecosystems and putting a price tag on the processes of the natural world. 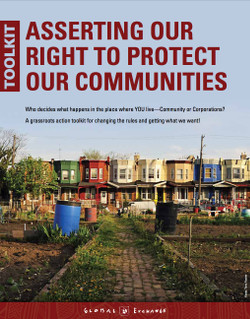 At the heart of the Community Rights Program is the belief that asserting our right to create the kind of place we want to live and reining in corporate power is the next evolution of the civil rights movement. Over 160 communities across the United States have already asserted their right to local self-government and stopped unwanted harms. Learn how to join them! 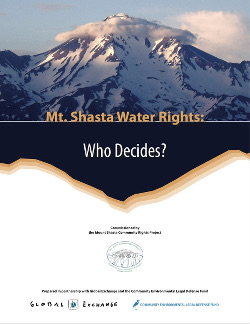 The City of Mt. Shasta Community Water Rights and Self-Government Ordinance is about asserting our right as a community to determine how to sustainably manage our natural resources and to ensure that our local livelihoods are protected. It has no partisan agenda because the rights of human beings and nature go beyond political affiliation.

This ordinance empowers us to say “yes” to sustainable water policies and the right of the people to decide how to govern their community on those issues. It allows us to begin asserting this right by saying “no” to water bottling and cloud seeding within city limits. 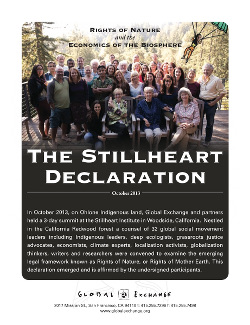 As humanity fast-tracks towards the collapse of our planetary systems, we sought to articulate a shared vision toward a new economy based on living in balance with natural systems; where the rights of humans do not extend to the domination of nature. We questioned the viability of a global economy whose jurisprudence places property rights above all; recognizes corporate rights as the most sacred of property rights; subordinates human rights and the collective rights of Indigenous Peoples to corporate rights; and where Nature is not recognized as having any intrinsic rights at all. 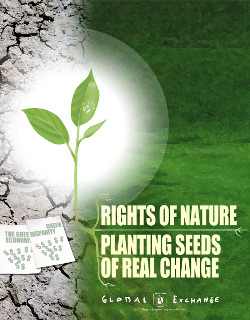 This report, “Rights of Nature: Planting the Seeds of Change,” directly challenges Rio +20’s Green Economy capitalism and examines the power and possibility and logic of a rights-based framework. Visionary thinkers such as Maude Barlow, Vandana Shiva, Thomas B.K. Goldtooth, Pablo Solon, Cormac Cullinan, Mari Margil and others ask the question: What would it look like to truly take on the root causes of climate change and put forward a system that places humankind in living balance with the carrying capacity of the Earth’s systems? If we are to truly reconnect within the system of creation, we must also reawaken our own humanity and love for Mother Earth and act as if what we do next matters. It does. 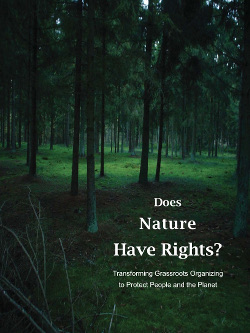 Does Nature Have Rights?

Old paradigm thinking will not generate a solution. The questions before us now are: can we envisage for ourselves a future based not on exploiting nature but upon recognizing that nature has inherent rights? How different would our human societies, economies, and structures of law look as part of a connected, Earth-centered community? And, how do we get there?