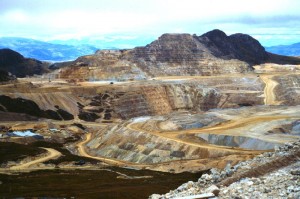 The following is a guest blog, written by Suzanne York.

The world is headed towards a “danger zone,” as it is passing a number of planetary boundaries that could destabilize the earth, according to yet another study by an international group of scientists.

While your average citizen is probably not even aware of the concept of planetary boundaries, it should be a cause of concern that human beings have pushed the planet across four of nine environmental boundaries.  Nor should this be a surprise, given the current state of the climate and global environment.

The Effects of Human Actions

The study, titled Planetary boundaries: Guiding human development on a changing planet, was published last week in the journal Science.  According to the report abstract, “The planetary boundaries framework defines a safe operating space for humanity based on the intrinsic biophysical processes that regulate the stability of the Earth System.”

The four boundaries are climate change, biodiversity loss, changes in land use, and alteration of biogeochemical cycles (due to use of the nutrients phosphorus and nitrogen). The five other boundaries not yet crossed are ozone depletion, ocean acidification, freshwater use, microscopic particles in the atmosphere and chemical pollution.  If humanity continues on the path of business as usual/inaction, it’s just a matter of time before these boundaries are exceeded.

Will Steffen, affiliated with the Australian National University and the Stockholm Resilience Center and the lead author of the paper, said that “What the science has shown is that human activities — economic growth, technology, consumption — are destabilizing the global environment.”

We can bury our heads in the sand and refuse to see the signs, but the signs are everywhere.  Just last month, the International Union for Conservation of Nature (IUCN) reported 22,413 species deemed at risk of extinction.  Science also published a study in 2014 that deemed human impacts on animal biodiversity are “an under-recognized form of global environmental change.”  And of course, 2014 was also the hottest year on record.

Despite the dire news, there is actually much we can do to reduce deleterious human impacts on the planet, from investing in clean energy to supporting alternative economic systems to simply empowering people to lead healthier lives.  (Even The Economist understands how solar is transforming the lives of hundreds of millions of people.)

And what about nature?  There is a growing rights of nature movement that is trying to change how we look at nature and shift the view from one of exploitation to one of respect.  During the UN climate negotiations in Lima last December, the Global Alliance for Rights of Nature held a tribunal that put the current global system on trial.   While essentially a “mock trial,” it was a serious event, as participants had first-hand experience of being exploited by the global economy that feeds on growth.  And some have faced death threats for fighting to protect their communities and environment.  One indigenous leader from Ecuador was killed just days before he was to appear at the tribunal due to his activism against mining in the Amazon.

This is the system that is shoving the world past so many planetary boundaries – mining, fracking, tar sands extraction, oil drilling, deforestation –  pushing us to the brink because of insatiable human demand for natural resources.

At the Lima Rights of Nature Tribunal, Casey Camp-Horinek, an indigenous activist from the Ponca Nation in Oklahoma, stated what too many people tend to forget, that “Mother earth is a living organism as truly as we are.  [We need to] set our human egos aside and recognize the sacred relationship we have with… the biosphere of earth.”

Let’s take action now, for as the longer the world waits to seriously address enormous global problems, the more difficult it will be to stem the tide.  At the very least, we should be thinking about the rights of all future generations to inherit a livable world.

Johan Rockstrom, another of the study’s authors and an environmental science professor at Stockholm University, put it well – “Just because we are not seeing a collapse today doesn’t mean we are not subjecting humanity to a process that could lead to catastrophic outcomes over the next century.”

It’s time to take our heads out of the sand.

Suzanne York is a senior writer with the Institute for Population Studies in Berkeley, CA.

Her work is focused on the interconnectedness of population growth with women’s empowerment, human rights, consumption, alternative economies, and the environment. Suzanne She is the author of several reports, including Peoples’ Rights, Planet’s Rights: Holistic Approaches to a Sustainable Population and Prioritizing the PHE Approach: Linking Population, Health, and Environment for a Better World. As research director with the International Forum on Globalization, she was a contributing author to Paradigm Wars: Indigenous Peoples’ Resistance to Economic Globalization.
She is a founding member of the Bay Area Rights of Nature Alliance, a wilderness lover, a dog blogger, and a good friend of Movement Rights.