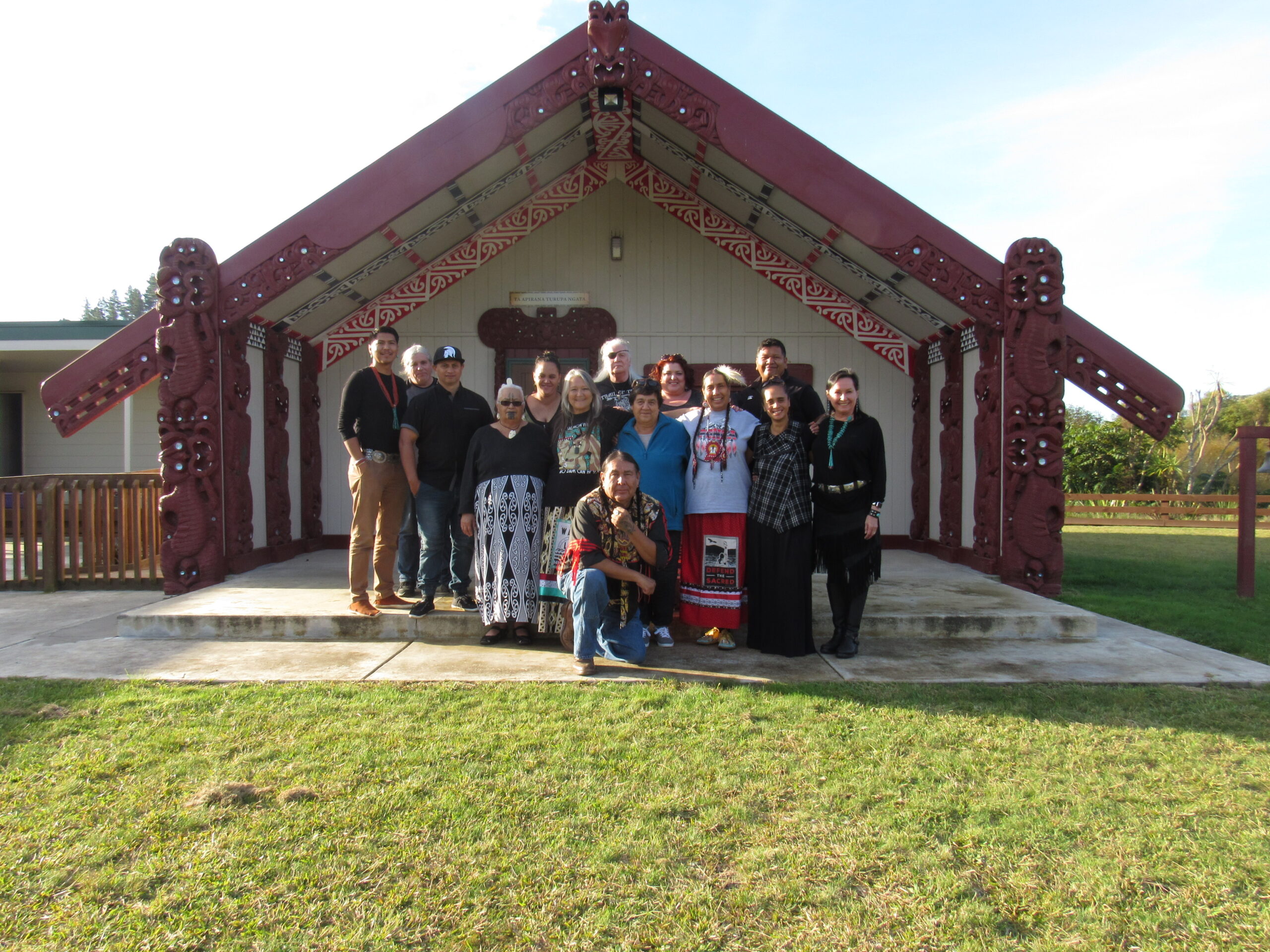 When Shannon Biggs found out about the Maori/New Zealand Crown Settlement Agreements which recognized the personhood of the Te Urewera rainforest and the Whanganui River she was one of the few who immediately understood the implications as a model for humanity to move forward toward a healthy and balanced world. 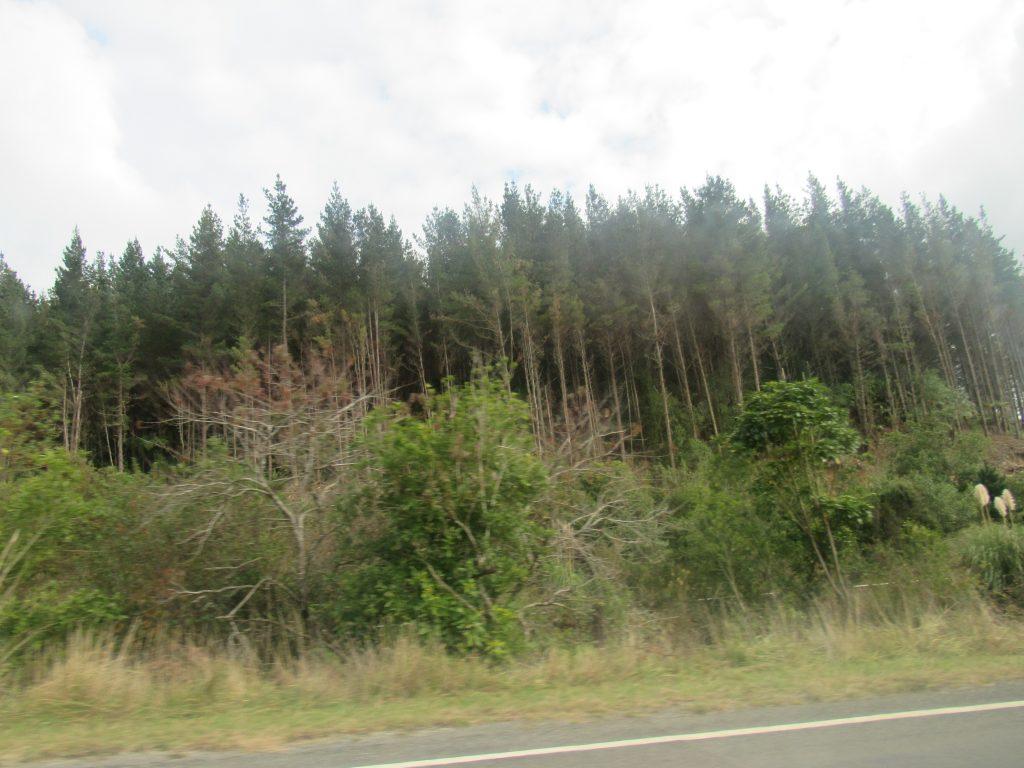 In 2016 she and I, with the important assistance of Maori elder Hinewirangi Morgan, traveled to Aotearoa to lay the groundwork to bring a delegation of Indigenous and non-Indigenous people from the United States to meet with the two Maori iwis (tribes) who were responsible for moving these agreements forward into law. 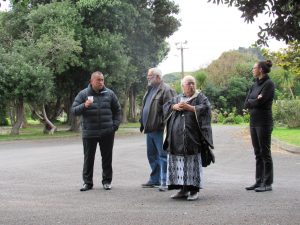 We also met with the attorney, Paul Beverly, who was contracted by the Crown government to establish these Agreements with the Tuhoe and Whanganui iwis. The assistance of Maori leader, Hinewirangi Morgan, and her students was immeasurable in the process of following the Maori protocols of requesting a meeting. She is an elder, teacher, and culture keeper among her many talents.  We would not have been able to navigate in the proper way without her guidance and we are forever grateful for her assistance. 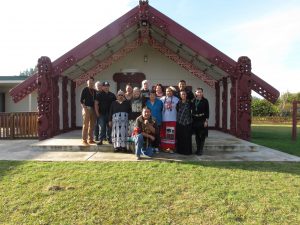 Now, a year and a half later, our delegation is here in Aotearoa.  The delegates include Movement Rights’ Board members Casey Camp-Horinek, a leader of the Ponca Nation and Tom Goldtooth, Executive Director of the Indigenous Environmental Network.  Additional delegates include Deon Ben from the Dine Nation, Michael Lane for the Menominee Nation, Neeta Lind from the Navajo Nation, Tim Lange of the Seminole Nation, and Osprey Orielle Lake of the Women’s Earth and Climate Action Network, Shannon Biggs, and myself.   We are once again led into the Maori protocols by the esteemed Maori elder, Hinewirangi Morgan.

We are now a little over half way in our journey as I write this from an internet café in Wellington.  At this point we have met with leaders from Tuhoe whose Settlement Agreement recognizes the rights of the natural entity, Te Urewera. 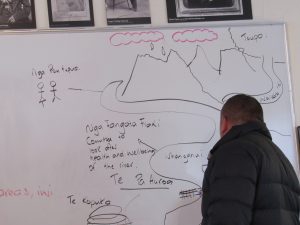 The leader who spoke with us, Tamati Kruger, led the negotiations toward the Settlement which took Te Urewera from being property owned by the Crown to a natural entity with the same rights as a person under the law, including the sacred rights as understood by the Maori people. 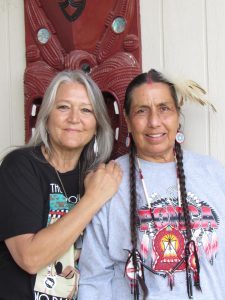 We were hosted in the beautiful sustainable LEED building which was built with funds from the Settlement Agreement.  It is a building that is meant to raise the hope of the Tuhoe people to look toward a Tuhoe future that is within the heart of what it means to be a Tuhoe person living on Tuhoe land.  The leader of the Tuhoe people, Tamati Kruger, explained that it will take two generations, forty years, for Tuhoe people to heal from the impacts of colonization and the historical trauma.  He acknowledged that this would be a very difficult process, that there would be, and already are, disagreements that must be resolved. That it would take decades.

The leaders we met with are from the Whanganui iwi that is closest to the sea.  We spent time with the Maori guardian of the river, Ned, a strong traditional man who took us on a whaka (canoe) so we could experience being on the Whanganui.  It was powerful and moving to be on a river whose rights are recognized by human law. To wonder if, finally, wayward human property laws are catching up to the understandings of Indigenous people: that we are not separate from the system of life but simply a member of the community of nature.

Our delegations also met with Paul Beverly, the attorney who worked on behalf of the Crown on the Tuhoe and Whanganui agreements.  Paul speaks Maori, understands the necessary Maori protocols and slept in the Maraes (traditional houses which contain the history of the iwi as well as photographs or drawings of ancestors).   I couldn’t help but imagine attorneys in the United States working on Indigenous rights being able to speak the language and know the customs and protocols of the tribal nations they deal with. The understanding of who we are as Indigenous people would be so much deeper and meaningful.

Our trip isn’t over.  We still have several days of meetings with other Maori leaders.  A report will come out of this trip that will be written by all of the delegates.  Watch for it. It will be powerful.

Movement Rights in Ecuador for the International Rights of Nature Symposium