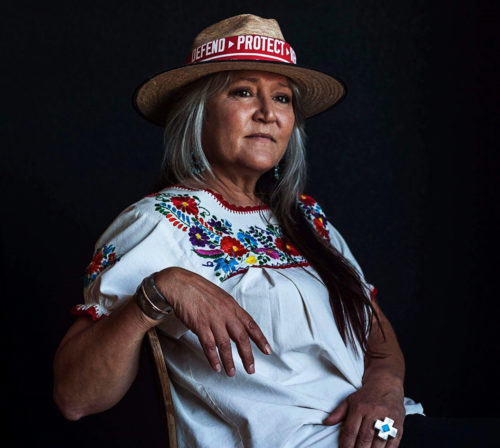 The United Nations Climate Change Conference, also known as COP26, will take place later this year in Glasgow, Scotland from Nov. 1-12. Leading up to COP26, this week President Biden has invited 40 world leaders to a virtual climate summit in the hope of negotiating deals with some of the world’s largest emitters of greenhouse gasses. Unfortunately, one thing that they will not keep in mind is that Mother Earth does not negotiate.

We have seen the impacts of climate disruption with increased wildfires, heat, drought, disruptive weather patterns, reductions in food production, and flooding here in North America.  In some parts of the world the impacts are more extreme with island nations disappearing under water, intense locust outbreaks, water restrictions, and more. Yet, armed with this information the so-called “developed nations” have failed to act as if the climate clock was not counting down toward mass extinction—in fact, the opposite is true.

Capitalism fuels a culture of individualism even though it is a relatively small group of billionaires’ wealth that is created at the expense of the many and the planet. The wealth class is unwilling to ensure a safe, healthy, sustainable future for their own grandchildren and generations to come. The system treats the Earth as property to be destroyed for profit. Greed is the pandemic that allows them to only see the dollars increasing in their bank accounts and not the consequence of their actions. If we were not living through this disaster, it would be a wonderful cautionary tale. Instead, it is the reality in which we live.

Indigenous people have been non-violently rising up and resisting the harms perpetrated by fossil fuel and other harmful corporations. There are countless photos of us putting our bodies on the line, filled with prayer and love for all we hold dear. We have all seen the women on the frontlines holding our medicine, praying and singing together, staying strong. Many understand that we are also held by prayers laid down hundreds of years ago by our ancestors who saw this time coming.

A movement that is quickly gaining momentum around the world is the Rights of Mother Earth, also called the Rights of Nature movement. Barely 15 years old, it is fundamentally based on the Original Instructions of Indigenous people, and the Indigenous understandings that everything is connected, and we are related to everything on Mother Earth’s belly within the sacred system of life. It is an understanding that biological communities are interconnected, evolved together, and must remain together for the system to be healthy. And that human beings are one of the more recent natural life forms and are simply one aspect of this beautiful system of life, no better or worse than any other life form. It seeks to shift the system, laws and culture toward living in balance with the Earth. Mother Earth is not human property, and as climate chaos shows us, she does not negotiate.

Movement Rights is an organization that works with tribes and communities to align human law with the natural laws of Mother Earth. It was founded by Shannon Biggs and myself, with Casey Camp-Horinek of the Ponca Tribe of Oklahoma and Chairwoman of the Board. Movement Rights’ work in the Ponca Tribe resulted in the first tribe in the United States to pass a Rights of Nature law to protect their territory from the impacts of the fossil fuel industry. And any day now, they will also pass Rights of the Arkansas and Salt Fork Rivers to protect them and begin the journey to restore their ability to thrive and regenerate their natural capacities. As is proper, the Ponca Pa’thata Women’s Society will be the guardians of the Rivers, which has been their responsibility since time immemorial. We will support their efforts to enforce the Rights of the Rivers through law, ceremony and non-violent direct action as necessary.

Movement Rights also conducts Intertribal Rights of Nature (IRON) forums for tribal nations and Indigenous people who are interested in learning how the Rights of Nature can assist them in protecting their territories. During this time of the Covid-19 pandemic, these forums, as well as webinars about this movement, are being conducted virtually.

Imagine the place you live where human laws are in alignment with the natural laws of Mother Earth. There would be no extractive industries or corporate harms to destroy the sacred system of life. Natural communities, which includes humanity, would be nurtured and restored to health. I invite you to spend time imagining this reality that many people around the world are working toward and to discuss it with your family and community. It isn’t a dream, it’s a possible, livable and thriving future we can still choose.

Pennie Opal Plant is an Indigenous grandmother, co-founder of Movement Rights, Idle No More SF Bay, and a signatory on the Indigenous Women of the Americas Defending Mother Earth Treaty. She has been a protector and defender of the sacred system of life for over forty years.