Mere moments after the January 20 inauguration, nearly all references to climate change vanished from the White House website.  The only exception was the new President’s vow to eliminate all traces of the Obama administration’s climate policies.  In the days that followed, the EPA came under attack,  corporate cronies and climate science debunkers took prominent positions in the White House cabinet. Like oil-drenched zombies, pipelines like Keystone XL and DAPL came back from the dead.

And just when it couldn’t look any worse for the health of the ecosystems that sustain us and the communities on the frontline of climate chaos, the White House pulled the plug on the Paris Climate Agreement.  Americans, the global environmental community and even fossil fuel CEOs exploded in a furious mix of anger, shame, fright and despair.

On its face, the UN COP 21 Paris Agreement seemed like an answer to the greatest challenge of human times.  Heralded by delegates, the media and mainstream environmental groups as the as “the world’s greatest diplomatic success”  a deeper inspection reveals what no one wanted to hear—it was closer to a plan to fiddle while the planet burned. Ironically, by removing the US from the Paris Agreement in a fit of bravado, President Trump may unwittingly be taking the strongest climate action of any administration in history.

“The action of Mr. Trump’s government is astonishing, though not surprising,” says Nnimmo Bassey, Nigerian environmental leader and director of Health of Mother Earth Foundation says, adding “I don’t see the fundamental difference it will make with regard to the defective Paris Agreement because the US delegations at the COPs have routinely been obstructive of real actions based on justice and equity.” These  sentiments are being echoed by  many in the climate justice movement.

“The U.S. is the biggest carbon polluter in history and in per capita terms, is a leading contributor to global climate change,” says Indigenous Environmental Network Executive Director, Tom B.K. Gold tooth. “Backing out of this agreement continues a long history of broken promises and threatens the vital and sacred life cycles of Mother Earth.”

As Scott Parkin from Rising Tide says, “[The Paris Agreement] favored corporations over the rights of Indigenous people and the Global South, and created a sense of false hope for slowing global warming while not really providing the mechanics on how to do it.”

Without doubt the Paris Agreement created a popular notion that the entire world was ready to take collective action, and for many environmental groups and active citizens of the world, it inspired new efforts and engaged newcomers to the struggle. This is an important piece of the climate struggle particularly in the wake of US withdrawal.

Are we mis-remembering Paris?

As Movement Rights reported upon returning from COP 21, there was little inside the text of the non-binding Agreement worth celebrating. For example:

It contains bad math: Scientists—or at least 99.99% of them, have warned that the world’s average temperature rise (from pre-industrial levels) cannot exceed 2 degrees Celsius—ideally, 1.5 degrees.   A 3 degree rise however, ensures catastrophic consequences and may be the tipping point that leaves humans powerless to intervene.  During the summit, it became clear that the 1.5 target had been eliminated.  The final Agreement was touted as a roadmap to contain global temperature rise to 2 degrees, but the country commitments actually add up to a code red 3 degrees warming.

Even to achieve 2 degrees, we must leave 80% of fossil fuels in the ground—yet the Paris Agreement lacks a plan or the current or future political will to do it. No country promised to “keep it in the ground”, rather the agreement seeks to “check in” on progress every five years.

Polluting Corporations helped write it: In part, the lack of enforceable action accounts for the half-hearted support of the Paris Agreement by CEOs of ExxonMobil and  Conoco Phillips in the wake of the President’s withdrawal.  As Cindy Weisner of Grassroots Global Justice Alliance remarked before the Paris COP:“[the] announcement of the corporate sponsors of the COP21 exposes the deep contradiction in UN COP process and their cozy relationship with the very corporations who are driving the climate crisis.

And then there’s the little understood idea that runs the entire framework of the Paris Agreement: the Earth, including the climate are treated as commodities to be bought, sold and traded on the open market.  The Paris Agreement reinforces false solutions of carbon markets and the financialization of nature.  This is critical to the fossil fuel agenda. 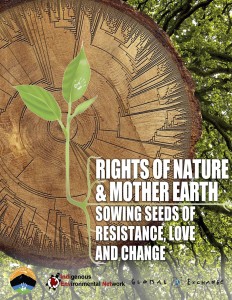 As Movement Rights and Indigenous Environmental Network’s  Tom Goldtooth warned in our Paris report: “The climate Ponzi scheme of trading of air, water, trees, soil, and biodiversity along with false solutions of carbon capture, genetically modified organisms, geoengineering, synthetic biology, nanotechnology, agrofuels, fracking, nuclear projects and energy generation from incineration—all these will do more harm than good to Mother Earth.” Yet this was—and remains—the basis for the Paris Agreement. (For more on what is in the Paris Agreement click here.) It’s also worth noting that for whatever small wins and “better than nothing” attributes the Paris Agreement may have contained, it didn’t stop Arctic or deep sea drilling, DAPL, fracking, or other violations of the Earth.  Any gains on those fronts came hard won by real people putting their bodies on the line and taking action—often in the places where they lived.

Real Climate Action may be closer than you think

But at least as far as the United States is concerned, the flaws inherent in the Paris Agreement may matter so much anymore.  The ‘Art of the Deal’ POTUS has dealt us out of the running for any kind of national climate leadership at twitter storm speed. But maybe there is some unexpected magic in that.

As Tom Goldtooth says, “The U.S. is the biggest carbon polluter in history and in per capita terms, is a leading contributor to global climate change. Regardless of the many shortcomings of the Paris Agreement, it is critical that the U.S. be held accountable for its moral and ethical responsibilities to take ambitious action to meet the Agreement’s [2 degree] goal, but I must note the Agreement’s aspiration goal of 1.5°C.”  By surrendering the mantle of climate leadership at the federal level, the President has unwittingly tasked communities and states to do better.

As a country we can no longer rest our fate to the hands of trade and climate negotiators we will never meet, and a system beholden more to corporate interests than planetary ones. Instead we have to take ownership of our climate future where we live.  We never felt empowered to do that before—now we have no choice.

Things are already moving fast in this direction.  Almost overnight climate decisions once made at far-away UN conventions are shifting to city and state governments. A dozen states and more than 200 cities committed to meeting the Paris Agreement in the last week.  Governor Jerry Brown of California, the world’s 6th largest economy on its own has formally requested to negotiate within the UNFCCC COP process, and the Governor has already met with Chinese President Xi to pledge action.

Of course, many state and even city leaders are beholden to the same corporate influences that plague the Paris Agreement.  While seeking a clean climate legacy, California’s Governor Brown has been widely criticized for his financial ties to Big Oil, his pro-fracking policies, and his commitment to carbon-trading schemes  like REDD. During the last 6 years, the Oil and gas lobby has spent $122 million in Sacramento, a good deal of which has ended up in Brown’s campaign coffers, now under investigation by the Fair Political Practices Commission.  As Rootskeeper director David Braun has said, “Pay-to-play politics has allowed the dirtiest polluters in the world to legally poison our communities and exacerbate the climate crisis.”

While this should be concerning to anyone hoping states will take up the climate mantle that the White House dropped, the good news is that we can pass local laws ourselves (and if we want to pressure  state legislators and city officials we know where to find them)  AND we don’t have to settle for the Paris Accord. Some communities working with Movement Rights and partners are considering passing local Climate Rights ordinances to stop harmful projects before they begin and begin to set new standards locally. Indigenous peoples have put their bodies on the line at Standing Rock and on their territories everywhere to show us what  protecting the Earth will truly take.

We can and must feel emboldened as residents to take on climate change in terms that make sense and in places we can related to.  Targets don’t have to be “parts-per-billion” in the  atmosphere-at-large but closer to home at the source—at polluting factories, GMO crops, oil trains, fracking and other places where carbon and methane are emitted. This is where real climate decisions should have been made in the first place—at the source of greenhouse gas emissions. We have a right to a clean climate and a direct responsibility to protect humanity, future generations and the rights of the climate. Now more than ever, it really is up to us.

We understand that the current systems of law favor corporations

over the environment and people and that this is an unsustainable system.  We also understand that these systems are new within the span of time that human beings have existed…only in the last 200 years or so. We understand that to shift this system that is destroying life requires healthy models to build upon.  Movement Rights is an organization of exploration and creativity in searching out the best paths forward for a sustainable and healthy future.  We appreciate the many Indigenous models of science which exist within the natural laws of Mother Earth.   And, we need your support to help us to continue this exciting and vital work.

We invite you to put your energy, in the form of money, toward Movement Rights as we continue to work on creating the world that we all want to see.  Please make a donation to our vital work today. We can do this. We can shift where and how decisions are made. We can win. Join us today.

Support the movement for Rights of Nature and Indigenous rights today

Must Watch: TIPNIS and the Rights of Nature (Video in English/Espanol)

Finding Victories for the Amazon (and beyond)