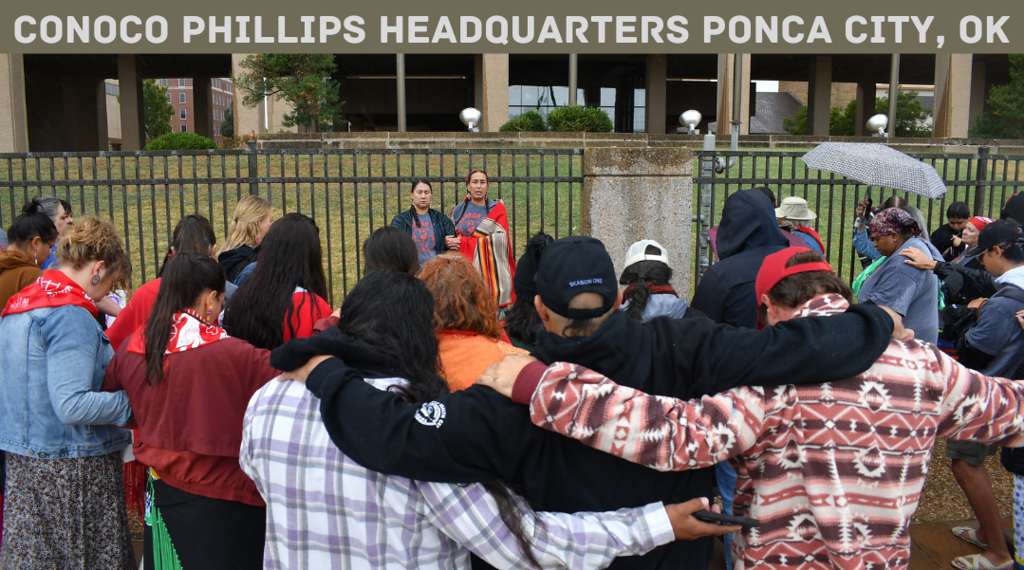 Reflections on the first Convening of the 4 Winds

Isabella Zizi is Northern Cheyenne, Muskogee Creek and enrolled Three Affiliated Tribes. Isabella attended the first of four Convening of the 4 Winds as a signatory of the Indigenous Women Defending Mother Earth Treaty, helping to organize the Equinox prayer march to ConocoPhillips. She is also a leading member of Idle No More SF Bay. See her full bio at the bottom of this article.

View the full gallery of photos from the first Convening of the 4 Winds here.

I was very fortunate to participate in the first Convening of the Four Winds hosted by the Ponca Tribe of Oklahoma, supported by Movement Rights and partners. The Convening was held over two days on Ponca territory during the autumn equinox. More than 100 participants traveled from the region and beyond, representing the struggles from their communities or tribal territories such as cap and trade, desecration of sacred sites, Missing and Murdered Indigenous Women (MMIW), refineries, fracking and pipelines.  We all shared a common goal: the protection of water.

The first morning began with a welcome from Ponca Tribal Vice Chairman Robert Collins at the Ponca powwow grounds at the banks of Ni’ží’dè (the Salt Fork River). The sun was already strong as Casey Camp-Horinek, matriarch and Ponca Environmental Ambassador  and Drum keeper of the Ponca Pa’thata Women’s Society led a beautiful water ceremony.

The Ponca have prayed, danced and been in ceremony on these sacred grounds since the mid 1800s when they were forced at gunpoint from their original homeland on the Missouri River near Standing Rock to Oklahoma. In his lifetime, Casey’s grandfather, a child at the time of forced relocation would recall how they chose this area because the rivers reminded them of their original homelands. In this same spot, Casey circled the water protectors opening the Convening of the Four Winds. Each person was invited to bring water from their watershed and offer a testimony aloud or from their hearts. It was the hottest day of the week, reaching 102 degrees, but as the waters joined in the bucket we were blessed with moments of cool breeze from time to time. Afterward, everyone was invited to walk to the Salt Fork River where the collected waters and prayers were offered back to the river.

The Pa’thata Women’s Society provided lunch at the White Eagle Cultural Center. Casey Camp-Horinek and Shannon Biggs of Movement Rights shared good news that in July 2022, the Ponca Tribe of Oklahoma became the first tribe on Turtle Island/US to recognize the Rights of Rivers and all waters in the territory.

The tribal law, the Immutable Rights of Rivers,  recognizes Ní’skà, (the Arkansas River) and Ni’ží’dè, (the Salt Fork River) that give life to all living things as ancestors with the right to flow freely from contamination. In 2016 they were also the first tribe in the US to recognize the Rights of Nature to help stop fossil fuel projects on Ponca territory.

This had many of us thinking about the many changes and positive outcomes this can have for tribes, communities and all beings that are connected by the rivers which flow not only through Ponca lands, but throughout Oklahoma and beyond.  Rivers could be protected for generations to come by tribes passing such laws and recognizing our human responsibilities to protect those rights.

The hospitality of the Ponca people continued through the evening with drumming, singing, Intertribal dancing and words of gratitude. It was my first-time hearing songs for a “Wolf Dance” and at one point Casey said aloud “come out and dance!”

I borrowed a shawl gifted from the Ponca to Movement Rights co-founders many years before and joined Casey and her relatives for a few songs. It was such a beautiful and uplifting feeling to follow their lead and feel the medicine of the drum. There were many moments when the community was invited to offer words of gratitude, humbling words, shared memories at Standing Rock, honoring the elders and the young leaders, deep appreciation for the Ponca Nation and much more.

The next day, September 22, was the Indigenous Women of the Americas Defending Mother Earth Treaty Fall Equinox action. We were caught by surprise by the unpredicted change of weather. It dropped 30 degrees from 102 just the day before. As we gathered in a circle at Dave Moran Park for the march to the Conoco Phillips oil and gas “museum” and headquarters, we were greeted by drizzling rain. Casey shared that it was a feminine rainfall, gentle and light, but steady.

Also present was a media team from France, and local reporters who filed a story about the Convening on the front page of The Ponca City News.  Members of the IkiyA Collective walked us through protocols on ensuring a safe non-violent direct action as we prepared to walk to the headquarters of ConocoPhillips and the refinery.

A number of us held posters reading “Water is life” “Black Snake Killa” “Protect the Rights of Rivers” “Onner Da Dinosaur Oyate” as we walked prayerfully in the rain from the park to the front gates. It felt like such a symbolic moment watching each word and drawing slowly fade away by the rain on our handmade signs as we carried them with honor.

As we made our way back to the White Eagle Cultural Center, the rain stopped, and we got to warm up by the sacred fire outside. Inside, we ate warm corn soup and chicken with rice. As young ones cleaned up, LUSH cosmetics Ethical Campaigns Specialist gifted everyone with small fragrant pots of LUSH Charity Pot lotions featuring the Ponca and Movement Rights, and Indigenous frontline photographer/activist Norm Sands gave everyone handmade MMIW scarves.

Next we began a series of strategy sharing from the Indigenous frontlines of climate change. Joye Braun, Cheyenne River Sioux, and Indigenous Environmental Network pipelines organizer, connected the dots for protecting waters from fossil fuels upstream and downstream from Cheyenne River in South Dakota to Ponca territory  and beyond. Her moving words reminded us that we are all one through life’s first medicine, the water, and that we must all come together to stop fossil fuels.

Renea Perry, Tlingit, Inupiat, brought a beautiful perspective to Indigenous Just Transition from her work with the Portland Canoe Family in Oregon. The frontline-led  IKIYA Collective led a strategic training on conducting non-violent direct action in our communities. This included how to remain safe in states that have passed laws that make protesting fossil fuels a felony. Thomas Joseph, Hoopa Valley Tribe, painted a clear picture of how harmful false solutions like cap-and-trade schemes are directly connecting one Tribal territory with forests to another with refineries.

After the event, Dr. Crystal Cavalier said, “This event was packed full of traditional ecological knowledge, especially around protecting the Rights of Rivers. The highlight of the event for me was when we marched to ConocoPhillips HQ, and the rain blessed us with her gentle reminder that WATER IS LIFE. I want to thank Grandmother Casey and the relatives of the Ponca Nation for inviting us into their territory.”

I am still in awe with the knowledge I was able to bring home to Richmond, California. I continue to reflect on the beautiful and powerful convening of Indigenous peoples and climate justice allies.

A message from Movement Rights: The Convening of the 4 Winds is not a one time event. Rather, it is a vision for intertribal water protection. There are over one thousand miles of rivers connecting tribes in Oklahoma and beyond. Imagine the power of Oklahoma’s 37 tribes coming together to protect water and the Rights of Rivers. The Convening of the 4 Winds was named for the vision of moving this event in four directions, connected by the rivers. Over the next two years, organizations including Indigenous-led Movement Rights and the Indigenous Women of the Americas Defending Mother Earth Treaty signatories and allies plan to support other tribes connected to these Rivers to host similar events and share strategies like the Rights of Rivers. “The hope is that on the Spring Equinox in March 2023, the next Convening of the 4 Winds will be hosted by another tribe,” says co-founder Shannon Biggs. “We’re ready to help continue what the Ponca Tribe is beginning with this gathering and support an ongoing effort toward intertribal river protection.”  Learn more here or consider making a donation to this ongoing effort. We thank our event co-sponsors for making this event—and the next Convenings—possible.

Isabella Zizi is Northern Cheyenne, Muskogee Creek and enrolled Three Affiliated Tribes. Born and living in Richmond, California Isabella is a community organizer passionate about climate justice, food justice, youth empowerment and cultural preservation. The explosion at the Chevron Richmond Refinery on August 6th, 2012, that sent 15,000 residents to the hospital paved her journey. In 2014 she became the youngest leading member of Idle No More SF Bay after receiving the guidance, wisdom, and support from the Indigenous Grandmothers. In 2015 she received a Proclamation from the city of Richmond for representing the city and her climate work at the first ever White House Tribal Youth Gathering in Washington DC. Along with other organizers, Isabella led 5,000 people to the Army Corps of Engineers office in San Francisco to stand in solidarity with the Standing Rock Sioux Tribe and Water Protectors to stop the Dakota Access Pipeline. In 2017 she participated in panels, actions and disruptions with the Indigenous Caucus at COP23 in Bonn, Germany. Now you can find Isabella in Richmond working for Urban Tilth providing freshly grown and harvested fruits and vegetables to community members who don’t have easy access to grocery stores or fresh produce.

Dear President Biden, An Indigenous Perspective on Your Inauguration