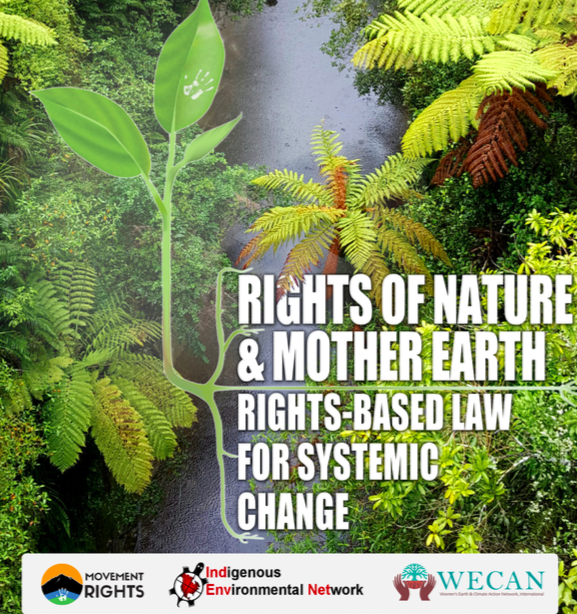 Movement Rights coproduced a report, Rights of Nature: Rights-Based Law for Systemic Change with our allies Womens Earth and Climate Action Network and the Indigenous Environmental Network as part of our activities in Bonn, Germany for the UN Climate negotiations.  The report is available for free download and has contributions from a dozen rights of nature global leaders.

BONN, Germany – Concluding the first week of COP 23 climate negotiations, it is clear that many civil society groups, scientists and economists believe the general UNFCCC climate framework will only serve to exacerbate chaotic climate conditions. At the opening of the conference, COP 23 President and Prime Minister of Fiji Frank Bainimarama remarked, “The need for urgency is obvious. Our world is in distress from the extreme weather events caused by climate change – destructive hurricanes, fires, floods, droughts, melting ice, and changes to agriculture that threaten our food security.” These civil society groups argue that while the rhetoric of the negotiators is good, the actions will not serve the needs of climate-impacted communities.

In a new report released for Bonn, Rights of Nature: Rights-Based Law 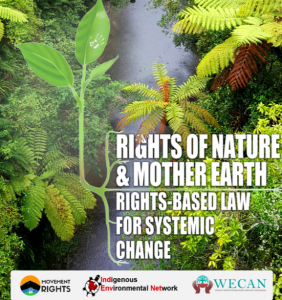 for Systemic Change, the authors point to a fast-growing body of international law that seeks to change how decisions about the climate and ecosystem protection. “Climate disruption is the direct result of human activities pushing beyond the limits of Natural Law,” the editors note, “Recognizing the Earth as a living system of which humans are a part, rather than as human property to be owned and destroyed is a fundamental shift from the climate capitalism embedded in the DNA of trade deals, environmental policies and treaties around the world—including the Paris Agreement.”

Current country commitments of the United Nations Paris Agreement add up to a 3+ degree rise in global temperature by 2050, an outcome that will dwarf the ravages of recent global record-breaking hurricanes, fires and droughts. “Climate science tell us we need to keep global temperatures to a 1.5 degree rise, something that cannot be accomplished unless we leave 80% of fossil fuel reserves in the ground,” editors note, “The Paris Agreement lacks a plan to accomplish that, and as a non-binding agreement, provides the opportunity for countries like the U.S. to simply walk away.”

On 11 November, California Governor Jerry Brown took the stage at the America’s Pledge event, themed ‘We’re Still In’. “When cities and states combine together and then join with powerful corporations, that’s how we get stuff done,” said Governor Brown before his speech was disrupted by protestors who came to confront his support of fossil fuels and big business.

“So I want to say that Nature and the air are not a means of commerce. Jerry Brown’s ‘American Pledge’ will lead to the displacement of my people and the destruction of my territory. We need to respect the Rights of Nature and humans beings that need her to survive.”

The report explores not just the idea of a shift toward recognizing rights of ecosystems but includes global examples from around the world where these new laws are taking root. In the last year alone, New Zealand and India have recognized rivers as rights-bearing entities that now “own” themselves.

They join the fast-growing list of 7 countries and dozens of local U.S. communities that are finding the only way forward to protect human communities is to shift our legal frameworks to align with natural law.