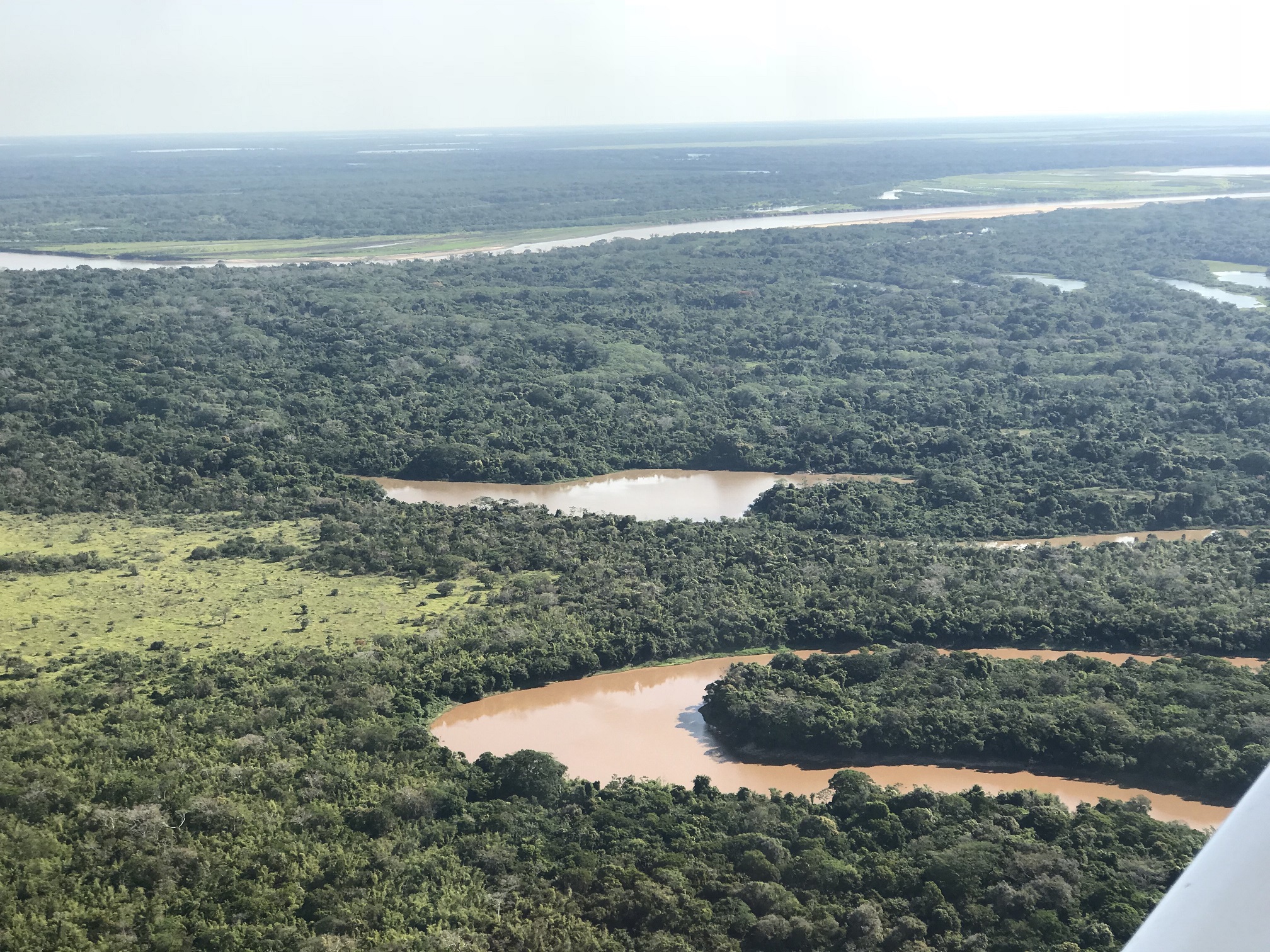 ISINUTA, Bolivia — After being held for five hours by members of the Indigenous Council of the South (CONISUR), a commission from the International Rights of Nature Tribunal abandoned an effort to enter the Isiboro Sécure National Park and Indigenous Territory (TIPNIS) as planned.

The commission had planned a discussion with leaders of the TIPNIS regarding the construction of a highway that would cross through the protected area. Some of the leaders are in favor of the highway, while others are opposed.

Alberto Acosta of Ecuador, Shannon Biggs of the United States, and Enrique Viale of Argentina were the members of the tribunal who were held, along with activists and reporters who were accompanying them, including members of a team from Mongabay Latam.

For five hours, intimidating threats created a tense atmosphere. “We’re going to use whips if you take photos,” the delegation’s captors told occupants of the five retained vehicles at one point.

The commission arrived in Bolivia on Aug. 16 to attend to a complaint filed by leaders of the Subcentral TIPNIS, Fabián Gil and Marquesa Teco, in November 2017 at the United Nations Climate Change Conference in Bonn, Germany.

At the conference, Gil and Teco invited members of the commission to visit the communities of Trinidadcito and Santísima Trinidad. Their goal was to show why they believe the Bolivian government is violating their rights to the territory, their autonomy, and their free, prior and informed consent.

Although the commission from the International Rights of Nature Tribunal had no trouble gathering information from leaders and community members from Trinidadcito on Aug. 17, that was not the case during their later visit to Polygon 7, an area of TIPNIS land inhabited largely by coca growers.

The commission hoped to have discussions with a group of leaders from CONISUR, including coca farmers and indigenous people. The CONISUR leaders had originally invited the commission to the area to show them that they don’t believe there has been environmental damage, as Gil and Teco had claimed in Bonn. However, that visit never took place.

It all began at 10 a.m. on Sunday, Aug. 19, when the members of the International Rights of Nature Tribunal, along with 20 additional people who were part of the commission, were stopped and held at the Isinuta Bridge in Cochabamba, Bolivia. Community members blocked their path with a rope strung across the width of the road leading to the TIPNIS.

Shouts and threats came next. “No photos, videos, or notes,” said the members of CONISUR living in Polygon 7, who are largely in favor of the construction of the highway.

For the first hour, no one could exit any of the vehicles. However, some members of the commission tried to talk with the TIPNIS community members and explain to them that they had been invited by their leaders, and that their intention was to reach Santísima Trinidad to listen to those who lived there. The refusals continued: no one would pass through until their leaders arrived.

Members of the TIPNIS community surrounded the vehicles, and on the bridge, another group began to strengthen the blockade using tree branches and iron rods. Several meters away, a line of small buses created a further barrier to prevent any possibility of access. The commission’s five vehicles were unable to move forward or backward.

Two hours after the blockade began, Alberto Acosta, the president of the delegation, said they were being held against their will, since they could not leave the area. “We had been told [by the Cabinet of Bolivia] that we had all the guarantees, but we weren’t able to enter [the TIPNIS] and now we can’t leave,” Acosta said.

Members of the TIPNIS community approached the vehicles again to say that their leaders were close to having their midday meal, and they recommended that the visitors have lunch as well outside their vehicles. Meanwhile, some of the community members shouted, “Let them know how we suffer!” and “Are they the ones who suffer without anywhere to go?”

Because of the members of the media present, Acosta’s statements began to spread across social media on a national and then international level. Several public figures and legislators asked that guarantees be given to ensure the members of the commission could leave the area.

After four hours of waiting, a non-commissioned police officer arrived at the blockade to verify the situation, after receiving word that the president of the Assembly of Human Rights of Bolivia, Amparo Carvajal, had said the situation constituted a “violent retention.”

The police officer recommended that the visitors leave the vicinity on foot and abandon their vehicles. He had been informed that even more community members would soon arrive at the blockade. “I just can’t do much,” said the officer, while members of the media took photos with cellphones cautiously to avoid being discovered by community members.

Around 2:30 p.m., after more than four hours of waiting in temperatures above 30 degrees Celsius (86 degrees Fahrenheit), Acosta asked that the delegation be allowed to return to Cochabamba. “There was no way to talk; we didn’t want to go anymore,” he said. The community members told him that in an hour, they would meet with their leaders.

Finally, leaders from CONISUR, Gumercindo Pradel and Jacinto Noza, arrived in the area and spoke with the commission members.

Acosta told the leaders that the commission was there by invitation from CONISUR and that their intention was to listen. Noza said they had not invited them, and that there were other people who were trying to usurp the true leaders’ functions, alluding to Gil and Teco, who spoke in Bonn about the problem. (A rival leadership faction led by Domingo Nogales and related to the Bolivian left-wing political group known as the Movement for Socialism, or MAS, claims there is a division among the indigenous people within the TIPNIS.) However, the invitation referred to by Acosta was in fact signed by Noza himself and made public on Aug. 1.

Acosta read the invitation letter that Noza had signed. Noza simply said the document was invalid because it had not been approved in an assembly. “Give me the name of the person who gave you the letter,” he said to Acosta.

Noza then claimed the community did in fact want to host the commission as guests, but that it was necessary to organize the visit in a legal manner by asking permission from those who lead the community. (By signing the letter of invitation, Noza had done just that.)

Pradel, the former leader of CONISUR and an expert on natural resources, said that in an assembly on Aug. 17 and 18, they had decided not to let anyone, including members of the press, enter the TIPNIS. “Any entrance must be coordinated with us, with the leaders of the area,” he said.

Acosta said his intention was to meet with all the people who were in favor of or who opposed the construction of the highway through the TIPNIS land. His goal was to prepare a report to be considered by all the members of the International Rights of Nature Tribunal. Eventually, they also hoped to meet with the president of Bolivia, Evo Morales.

Finally, the commission was escorted by police from Isinuta to the community of Villa Tunari.

For Enrique Viale, the tribunal member from Argentina, it was a tense and tiring experience. He said he regretted not having spoken with those from the community to understand their position regarding the highway and the protected area. Viale has been involved in many environmental fights in other countries, including Argentina, where he has experienced difficult moments. He said none of those came close to what he experienced in Isinuta: “This is the first time. It was a tense moment. They didn’t mistreat us physically, but it was tense,” he said.

What came as the biggest surprise to the U.S. delegate, Shannon Biggs, was the recommendation by the first police officer on the scene that that they leave on foot, without their vehicles. Like Viale, she said she also regretted not having been able to speak with members of the community of Santísima Trinidad.

“We hoped to have a dialogue with them, but they blocked our cars with trucks and iron rods, which impeded any vehicular movement. We didn’t have the freedom to go anywhere,” Biggs said.

For Acosta, the most critical point was the fact that a group of residents could obstruct a road in Bolivia where the government doesn’t have much presence. He later said he regretted not being able to enter the TIPNIS through Polygon 7, where the second phase of the highway’s construction is planned. “Roads have tremendous impacts, and they encourage uncontrolled colonization,” he said, adding the commission would have to use satellite data to see what unfolds in Polygon 7.

Acosta said they were, however, able to collect valuable information in Trinidadcito. “The people told us their experiences, struggles and hopes. [They told us about] the violent situations, not only against Mother Nature, but also against the people,” he said.

Acosta also denounced the manipulation of people’s thoughts by their leaders. As an example, he cited the fact that more than one community member had told him they needed the bridge and did not want the International Rights of Nature Tribunal to destroy it — something the tribunal never planned to do.

Vice Minister of the Environment Cynthia Silva justified the blockade in a later social media post: “Let’s see how Alberto Acosta and the activists explain it, who are representing the interests of nongovernmental organizations, who wanted to pass over legitimate indigenous representatives, and who have the nerve to accuse our government of ‘not having control’ in our own territory,” she wrote.

She also questioned the commission’s legitimacy, calling it a “non-existent tribunal, ‘baptized’ by nongovernmental organizations that send activists.” This despite the fact that the tribunal, created in 2013 by the Global Alliance for the Rights of Nature, is tasked with enforcing the Cochabamba Declaration, which protects the rights of nature and was promoted at a summit organized by President Morales himself.

The tribunal’s resolutions are not linked with any one country’s government, but rather its goal is to expose actions that violate the rights of nature that occur in any of the member countries.

The tribunal’s commission stayed in Bolivia until Aug. 23 and carried out several other scheduled activities, including a seminar at the University of La Paz and a public talk about other issues, including hydroelectricity in Bolivia’s Santa Cruz department.

This story was reported by Mongabay’s Latin America (Latam) team and was first published in Spanish on our Latam site on Aug. 20, 2018. It was translated by Sarah Engel.

Banner image of a rainforest in Bolivia by Elias Bizannes via Wikimedia Commons.

Historic Indigenous Women’s Treaty Calls For Action for the Earth