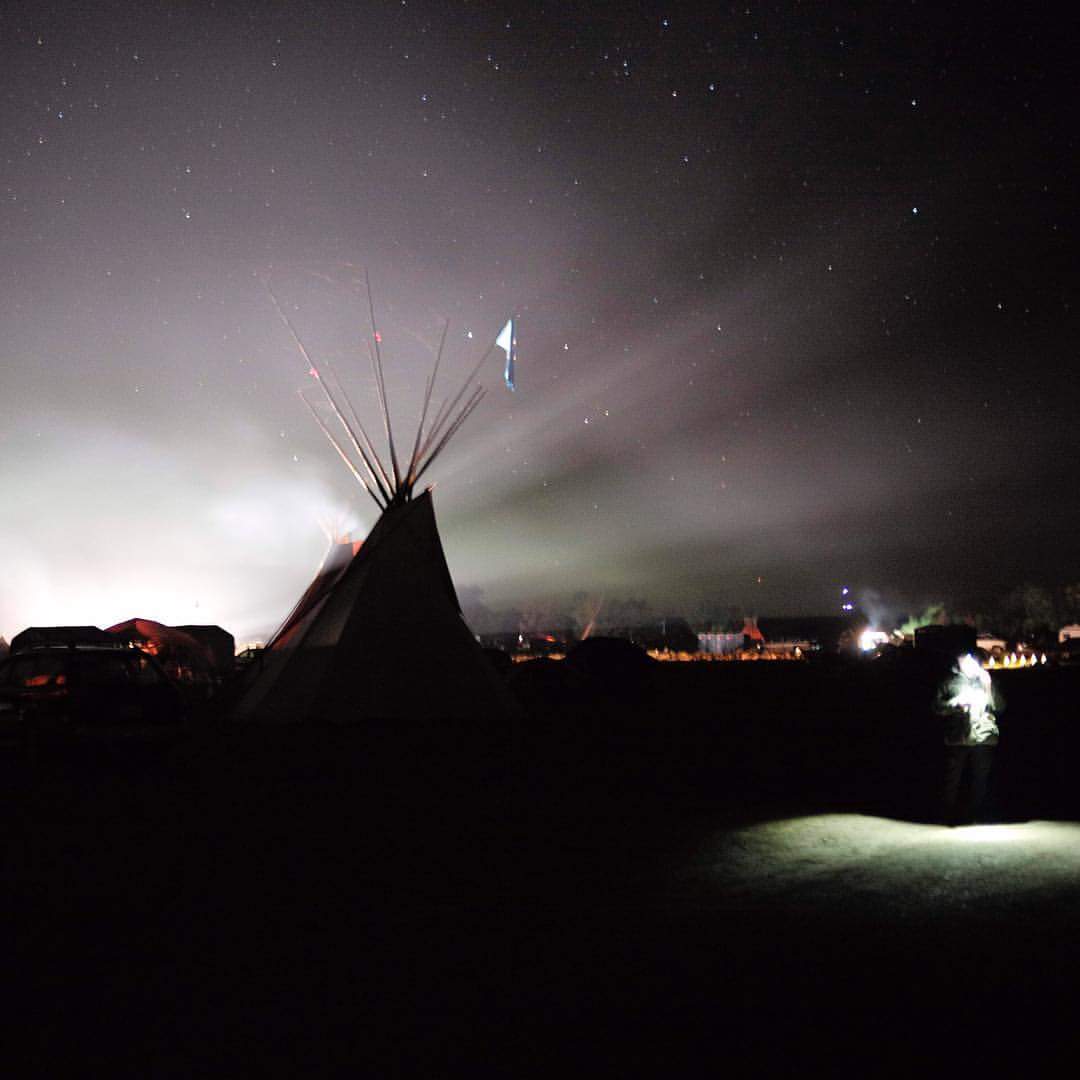 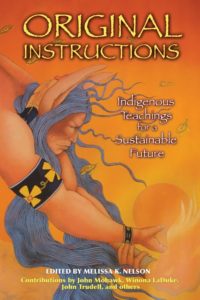 predicted the time would come after 7 generations of European settlement to Turtle Island when the waters, land and air would be so polluted that the animals and plants would become sick and begin to die.  The prophecies also say that when young Indigenous people will retrace their steps to find the Original Instructions and remembering the true responsibilities of being a human and help others remember that they too are Indigenous to Mother Earth’s belly, and that we must act now.  Prophesies of the Black Snake that would go across the land spilling poison, which Indigenous people understand are the oil pipelines that have already destroyed miles of many rivers including the Athabascan, Kalamazoo and Yellowstone Rivers.

Everyone who cares about what is happening to our climate and environment has been moved by seeing thousands upon thousands of Indigenous people and non-Indigenous allies living in tents, teepees and out of cars at the Sacred Stone Camp and overflow camps in North Dakota to protect the water by putting their bodies on the line of the Dakota Access Pipeline.   Caro “Guarding Red Tarantula Woman” Gonzales, a 26-year-old Standing Rock protector and co-founder of the International Indigenous Youth Council, told ThinkProgress, “When people are chaining themselves to bulldozers, that is prayer.”

Hundreds of people have been arrested or have risked arrest to protect the water in the Missouri River.  Protectors and Defenders have been bitten by attack dogs urged on by corporate private security.  The whole world is not only watching, but inspired to action, creating a growing stream of delegations to the camps.  Among the delegations this last week were the Saami from the Arctic Circle and the Havasupai from the Grand Canyon.  What is happening in North Dakota is powerful.  It is important.

But Standing Rock it is not just a single action, rather, It is a signal for people everywhere to take a stand in their communities for the health and safety of water, soil and air.  This great power is moving through us and it will only grow.

The Role for Rights of Mother Earth 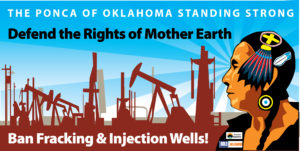 In mid October 2016, Movement Rights co-founders will be in Oklahoma to meet with members of the Ponca Nation of Oklahoma  about how to recognize legal standing for ecosystems (rights of nature) to protect their citizens from fracking and injection wells. (You can donate to the Ponca campaign here.)

Injection wells forcefully insert toxic fracking wastewater deep into the ground and is the cause, along with fracking, of the thousands of earthquakes in Oklahoma.  The toxins from the fossil fuel industry have deeply impacted the Ponca Nation and have caused an epidemic of cancers, autoimmune and respiratory diseases.

According to Ponca Tribal Council member, Casey Camp-Horinek, who is also on the Board of Movement Rights, “All of the Ponca people who live within the area of the Conoco Phillips 66 refinery and the other fossil fuel extractive industries in the area have family members who have cancer or who have died from cancer, and/or who are suffering from autoimmune diseases such as lupus.”

Rights of Mother Earth (or nature) recognizes the right of ecosystems to “exist, persist and maintain their vital cycles.”  But while that may seem like common sense, it is actually a powerful legal tool to confront existing human law that “sees” ecosystems as property to be destroyed at will.  The concept was spelled out in the Declaration on the Rights of Mother Earth and has been gaining momentum around the world in order to protect communities from the continued devastation of corporate greed. These ideas have been used by Ecuador, Bolivia, New Zealand, the Ho-Chunk Nation and many non-indigenous US communities to not only ban dangerous practices like fracking and injection wells, but also to write into law what is to be protected so that future generations can exist in an environment that is, hopefully, similar to the one which we have enjoyed in our lifetimes.  In the United States, rights of nature ordinances have been passed in over 80 communities.  It has been said that citizens of the United States live in a democracy, but, as the Director of Movement Rights, Shannon Biggs, is fond of saying, “If we can’t determine what happens where in the places where we live, then we don’t really have a Democracy—it’s time to rewrite the rules for people and the planet, not corporate profit.”

In November of this year, Movement Rights will also be in New Zealand.   The Crown government of New Zealand, working with traditional Maori leaders, have recognized the rights of the Whanganui River and Te Urewera, a national park.  These two entities now have the same standing under the law as human persons.  This means that the “government gave up formal ownership, and the land became a legal entity with “all the rights, powers, duties and liabilities of a legal person,” as the statute puts it.”

Shannon Biggs and I will be meeting with Maori leaders and New Zealand government officials to lay the groundwork for taking a delegation of Indigenous and environmental leaders of the Americas to learn how these two revolutionary agreements came to be.  We are excited to begin to understand what it takes to recognize the rights of what is now called “ecosystems”, but is traditionally understood by Indigenous people as communities of life, no less significant than human communities.

Living in the San Francisco East Bay, not too far from the one of the largest estuaries in western North America, the San Joaquin/Sacramento Delta, I am excited about the possibility of working on recognizing the rights of this important body of water and all of the life it supports.  The Delta has suffered immeasurably from toxins introduced by the California Gold Rush, agricultural and chemical industry toxins, the siphoning off of its water for corporate agriculture in the San Joaquin Valley and populations in Southern California.  Imagine friends of the Delta being able to speak on its behalf in a court of law, speaking for the endangered Delta smelt, and being not only heard by the court, but actions to protect this magnificent being mandated by law. Earlier this year, Movement Rights and our partners at the Bay Area Rights of Nature Alliance held a Delta Rights of Nature Tribunal to showcase how this framework of ecosystem rights could apply to California’s most important waterway.

Movement Rights is working with communities to change the law of the land to understand that Mother Earth has inherent rights, the sacred system of life has inherent rights and that human beings are only a part of the system of life and must respect and restore it.  Mother Earth does not negotiate and the sooner our human family understands that, the sooner future generations will be safe from the idea that we can continue to destroy our home.

We live in powerful times with great responsibilities.  It is up to us to determine whether the lives of future generations will be viable.  It is up to us to imagine a future that is sustainable, healthy and safe for all of life as we know it and to act now to create that future.  It is time to push our own personal boundaries of what we are comfortable doing and step up to these responsibilities.  The people alive right now will either be seen as heroes who recognized our place in history, or as complacent and selfish people who did not care about the future generations.  It truly is time to choose.  I ask you to join us in our campaign to create the future we are envisioning.  It is beautiful.  Can you see it?