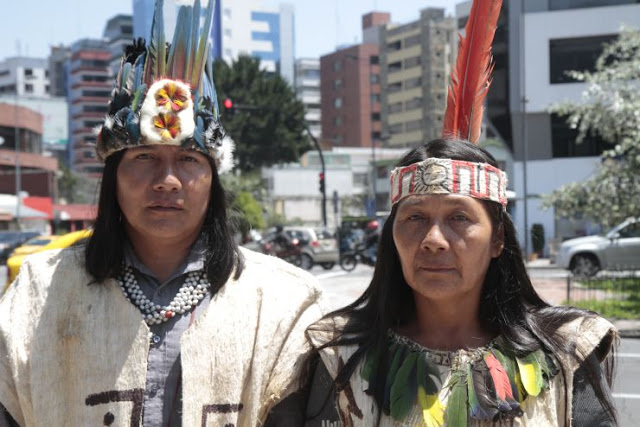 “We will fight oil until our last breath,” Manari Ushigua, president of the Zapara tribe (pictured with his sister, Gloria Ushigua) recently told journalists outside Ecuador’s Ministry of Strategic Resources. “Our spirit needs a healthy environment.” 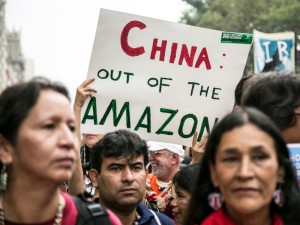 Imagine that you live in a place where all of your ancestors always lived.  Where you understood that the earth you were walking on was literally land made from the bones of those relatives.  Where food was so abundant there was no need for stores.  Where medicine for all of your illnesses grew in the form of plants all around you, your family and friends. Where there was no separation felt between you and the water, the air, or the trees.  Imagine that you knew and understood the language of the forest, of all of the animals, and that you understood with every breath that you are a part of this very sacred system of life.

Now, the hard part. Imagine it is all being destroyed by fossil fuel extraction. 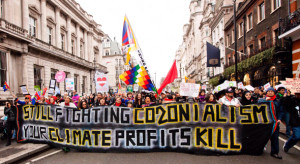 You have probably heard the statement that, “Indigenous peoples are on the front lines of climate change.” Its not just an expression. Living close to the Earth in a globalized world seeking “endless more” makes indigenous people vulnerable to the last gasp of the fossil fuel era.

Unfortunately, there are many examples of this which include the Beaver Lake Cree First Nations people whose territory includes the tar sands in Alberta, Canada, the Wangan and Jagalingou Aboriginal people in Queensland, Australia who are battling the government’s decision to allow a coal mine on their territory which would destroy their homes and sacred places, or members of the Biloxi-Chitimacha-Choctaw Nation in Louisiana who just became the first official climate refugees in the United States.

A new development in the fossil fuel destruction of indigenous lands is what is happening now in Southern Ecuador to the Kichwa people of Sarayaku.  The people of Sarayaku have been battling to keep oil extraction out of their territory for decades.

For a while, there was some good news.  In 2007, President Correa initiated a proposal to protect Yasuni National Park with a proposition to world governments to contribute $3.6 billion.  Yasuni is considered to be the most biodiverse place left on Earth. Even though the majority of Ecuadorians supported the Yasuni ITT Initiative, in 2013 President Correa scrapped it blaming lack of contributions by world governments.

Under the leadership of President Correa, Ecuador became the first nation in the world to write into its Constitution the Rights of Mother Earth in 2008, recognizing legal standing for ecosystems to “exist, persist, and regenerate their vital cycles.” This news was celebrated around the world by people who were hopeful that Ecuador was setting an example that other nations would follow. Unfortunately, President Correa has turned his back on the Rights of Mother Earth, and the peoples of the Amazon.

The people of the Amazon need our help to stop oil today.

Fast forward to 2016: In January, President Correa signed deals with three fossil fuel extraction corporations from China to explore for oil on Sarayaku territory.  This is the ancestral territory of the Sápara and Kichwa people of Sarayaku. They did not give their consent to this exploitation of their territory and have vowed to resist in defense of their rights, territories, living forests and our global climate. This land, comparable in size to the state of Vermont, located in the remote Sur Oriente in the southern Ecuadorian Amazon has been largely untouched, owing to the protection offered by the tribes who live there and consider it sacred.

Last year, Ecuadorian indigenous organizations asked China’s Prime Minister Li Keqiang to visit their territories in effort to stop the project, noting that in his own country, he promised to use an iron fist to “punish companies that violate Chinese environmental regulations,” and boldy stated that “fostering a sound ecological environment is vital for people’s lives,” and that pollution is “nature’s red-light warning against the model of inefficient and blind development.” Yet oil development is poised to begin in this land of beauty and proud people who have been taking care of some of the Earth’s most biologically diverse places.

Oil development will mean the death of this place, of the spirit of the land and the peoples who have defended and protected it since the beginning.  Our Kichwa sisters and brothers need our help. They have been struggling for so long to keep their territory safe.  Next week the women of Sarayaku will be conducting a women’s assembly to discuss what to do to keep their homes safe.  Details here. Women from various nationalities, including Kichwa, Sapara, Waorani, Shuar and Achuar will be gathering in the Amazon city of Puyo for a march, press conference and assembly on International Women’s Day. They will be joined by indigenous and NGO allies from the Andes and North America. The women have recently gathered, but have not marched together in many years. Movement Rights board member, Casey Camp Horinek will be there as part of a WECAN women’s delegation to stand with the women of Ecuador.

On March 8th, International Women’s Day, they will march through Puyo to stand up for the life of their land. There are many ways to support their action—wherever you are.

Here in the San Francisco Bay Area we will be conducting a solidarity action with them on the same day.  We are meeting at the Chinese Consulate located at 1450 Laguna Street from 10:00 a.m. to at least 1:00 p.m.  A letter will be hand-delivered on that day to Consulate officials.  If you can, please join us. Details: We Stand With Sapara Women

CALL THE CHINESE CONSULATE ON MARCH 8

If you cannot join us, please call the Chinese Consulate in your area on March 8th.  The San Francisco Consulate phone number is (415) 852-5900.  We ask that you be respectful in your comments.  The blame is not on individual people, but on the system that the United States has exported around the world which puts profits over the lives of people and which has allowed us the luxuries that we take for granted.

The Women’s Earth and Climate Action Network (WECAN), in concert with the Sapra and Kichwa women’s statements has put together a petition to let Ecuadorian and Chinese officials know the world is watching. The goal is 3,000 signatures but it would be great to have many more: Sign the Petition to Support Sapara Women   Please sign and share with your friends.  Our friends in Ecuador need our help.  Please do what you can.

When we stand together we are strong.  Let’s be STRONG.

For more information and to keep updated about ongoing fossil fuel issues in South America please go to Amazon Watch.

Will you be Standing for Rights in 2019?