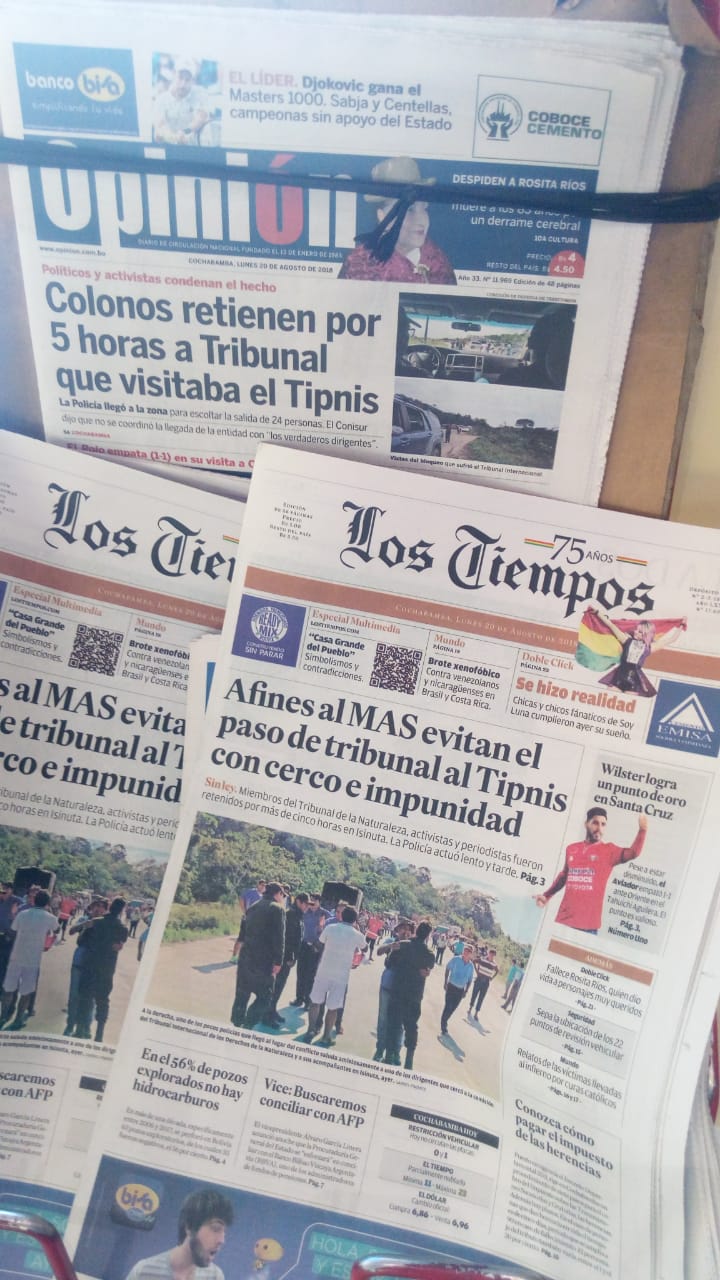 Recently, Shannon Biggs of Movement Rights had the opportunity to return to Bolivia as part of the International Tribunal for the Rights of Nature, a Commission which was born out of a gathering in Tiquipaya, Bolivia several years ago. On August 19th, 2018,  the Tribunal members were invited to visit the TIPNIS National Indigenous Territory National Park to speak to parties on different sides regarding the construction of a highway though the protected area, but were instead forcefully detained for several hours. The following is a translated account from a reporter who was traveling with the Tribunal and who was also detained.

When the Commission of the International Tribunal for the Rights of Nature landed in the Trinidacito community, of the TIPNIS, it was received with the traditional dance of the macheteros. About thirty men, old people, girls and boys dressed their shirts and danced elegantly to the sound of the drum. They danced in the soccer field and its multiple uses, as well as for the pahuichis of local families. In their beautiful and warrior movements they interpreted the eternal fight between good and evil, between God and the Devil, Heaven against Hell, from an interpretation of the Mojeño people. At the end of his presentation, the people of the community invited visitors to drink delicious grapefruit juice, which hangs from the trees at this time. From this paradisiacal reception, to the infamous retention to the Commission yesterday in Isinuta, it is necessary to cross complex circles of oppression, pain, power, destruction of nature, as well as cultures and families: everything to praise the shining money God. An exacerbated capitalism that is reflected in its star product, cocaine.

Isinuta
-Why do they come here? Now hold up.

The Tribunal Commission left Villa Tunari for Isinuta on August 19 at 8:30. It was expected to find people there in favor of the road that would go to San Ignacio de Moxos. It was estimated that there might be a siege, in which case it was expected to turn around and return to Cochabamba. What innocents. Of course, when the five automobiles wanted to turn around, the minibuses of the Mixed Union of Transport – Jun. 14 were being built (Indigenous? Yeah right…) So that the blockade of undefined, staggering and threatening people was ahead of them. I was there on behalf of the Indigenous Council of the South (Conisur), an organization that had sent an invitation to the Tribunal to talk…to be heard by the visitors. But at that moment, they decided to ignore their own call.
The plan of the Commission had been to reach the community of Santísima Trinidad, in the center of Polygon 7. And what is Polygon 7? There are some 200,000 hectares that in recent decades took the unions of peasants who produce coca leaf. They are already there, they settled down and nobody can take them out of the Isiboro Sécure National Park (TIPNIS).
The road that would pass through this territory would go through Polygon 7 and also above, where the life of the most biodiverse region in the country is not yet devastated. One must be very foolish to maintain that the road will not destroy everything around it, because logically it implies the entry of service stations, gomeros, as well as more coca farmers families, disinterested in caring for the environment and anxious to pocket the bills of that green circuit: coca leaves for dollars.
The fact that transporters blocked us was also logical. If the road is made by TIPNIS, it will be a new route to put your minibuses on the road. Some neighbors recommended us to take alternate routes to enter. A lady stopped for a while and told us that the residents of Isinuta are not interested in the road – which they already have to Villa Tunari, and from there to the whole country. “It reaches them,” she said.

In the Micro State

“Don’t be cowards…do not run away!” a man shouted, marking himself the brave man in the mob. About 150 protesters were at the blocking point. Somewhat less than the 1500 Indians who threatened to haul pro-highway leaders in past days.
Some of them sat in the shadow of the row of parked cars, waiting for the end of the blockade to continue on their journey. Many of the protesters took pure alcohol and chewed coca. By their faces, it seemed that at least since the previous night they had been in that regime.
A man approached one of the mobilities and looked at those who were baked inside.
“They are fried,” he said with his smile of golden teeth.  He asked us, “Why do you come here?” He stayed a while and said goodbye. “I’m going to pray for you,” he said sarcastically and left.
“We are going to burn them!” shouted some woman in an apron, white hat, and skirt. “Burn them!” endorsed another. Several towns in the Tropic of Cochabamba are remembered for having sometimes applied aberrant tortures and lynchings, misnamed “community justice.” So there was the Commission of about 20 people, including members of the Court, the Coordinator in Defense of the Territories, as well as journalists from the media, who from time to time removed the camera, even though it was expressly prohibited by the protesters . So we were for 6 hours at the mercy of a Micro State, known for its rudeness and intransigence when it comes to defending their interests.
An old man shouted in Quechua. He related that some thirty years ago, during the eradication, the peasants climbed the trees to wait for the soldiers of the United States and shoot them. He asked that they do the same with us.

The Pachamama is not here

The alliance between the national government and the cocalero unions is not based on common ideals, much less on a shared revolutionary political horizon. None of those communist talks that they outline is sincere. It is an exchange of favors for mutual benefit. The government needs bases that support it. The coca growers need nobody to bother them in their work. The two are managed under the same logic. For both, a highway means “development and progress,” a euphemism, because in reality they should say “money and business.” Both share a capitalist view of nature: a thing to be squeezed until it is emptied.
Far away is the image of the peasant concerned about their crops and the balance in the environment. Those who grow coca in this region do it for money, for a lot of money. According to testimonies of indigenous people of TIPNIS, nobody chews that leaf and goes all to the production of the “pichicata,” as they denounced in several occasions. That is why, in this tropic, the coca leaf represents the union between the peasant and the cruelest face of capitalism.
The natives of the Yuracaré and Mojeño peoples who still live within the Polygon 7 (Santísima Trinidad is one of them) are at the mercy of the colonizers, who do not stop colonizing. Changing their names to “Intercultural” in no way modifies the equation for oppressed and repressed indigenous people. They reported that in times of colonization, the miners-become-peasants “hunted” people Yuracaré or Yuki people with a home, as if they were rabbits. At that time they were uncontacted peoples, except for the bullets of the colonizers. They are murders of which there is no record.

Towards a Bolivia Made in China

They did not let us through. But they red carpet Chinese subjects to enter the Amazon to dissect huge caimans, they snatch the teeth of the beautiful jaguars, kill and take them with normalcy to their homes. Not to mention all the other big business between both countries, which makes China the country to which we owe the most money – $6,884,000,000 dollars.
Part of the caravan that was retained included Ms. Amparo Carvajal, who in January 2019 will turn 80 years old. She was in all his right to lose patience before the discourteous treatment of the blockers, especially with a man who walked with his whip. “Come to me if you want to whip me,” she shouted furiously. The man stood there…he was tempted. But there must have been something good in him, because he turned with his guards.
On the relentless asphalt of Isinuta it was 100.4 degrees Farenheit. At that moment, the affection of the Trinidacito community members was missed. As a farewell gift they gave each visitor three grapefruits, three of their treasures, of their terrestrial Paradise. But the blessed grapefruits had remained in Villa Tunari, along with all the luggage… just in case.
Those of the Conisur said that we would have a meeting at 3:00 pm, when the leaders returned to have lunch. There was an hour left. They told us that other organizations would be present at the meeting, such as the Six Federations of the Tropics, and that they would evaluate “surrendering” to them.
The compañeras and compañeros who stayed in the cities, attentive to what could happen, did not stop liking, sharing, tweeting, distributing the little material that could be sent from the place of fright. The foreign people of the Commission contacted their respective Embassies and friendly organizations around the world collaborated instantly. The pressure that was generated from outside allowed the appearance of one (1) policeman – because we were in a premeditated, liberated area.
The policeman asked us to leave the automobiles there and we left. Because more people came from other communities to reinforce the blockade, they were “upset” and could not guarantee our safety. So the only representative of the State that came – when we were already made into cracklings – came to keep us apprehended! Then the pressure was very great and, maybe because the government got bored with that game of cat and mouse, they asked us to send our exact location by Google Maps… as if they did not know where Isinuta is. After a while, a Colonel of the Police appeared with two other officers. He was in dialogue with the blockers, then mediated in an impromptu talk between the representatives of the Conisur and the Commission under Alberto Acosta. And they released us.
The policemen urged us to flee quickly, and said they would escort us to Villa Tunari. In the 37 kilometers of return, periodically a coliseum with the name of the President was seen. Also, on the side of the road every so often, ladies were seen spreading coca leaves on huge blue canvases.

(By Sebastián Ochoa, of the Coordinator in Defense of the Territories)