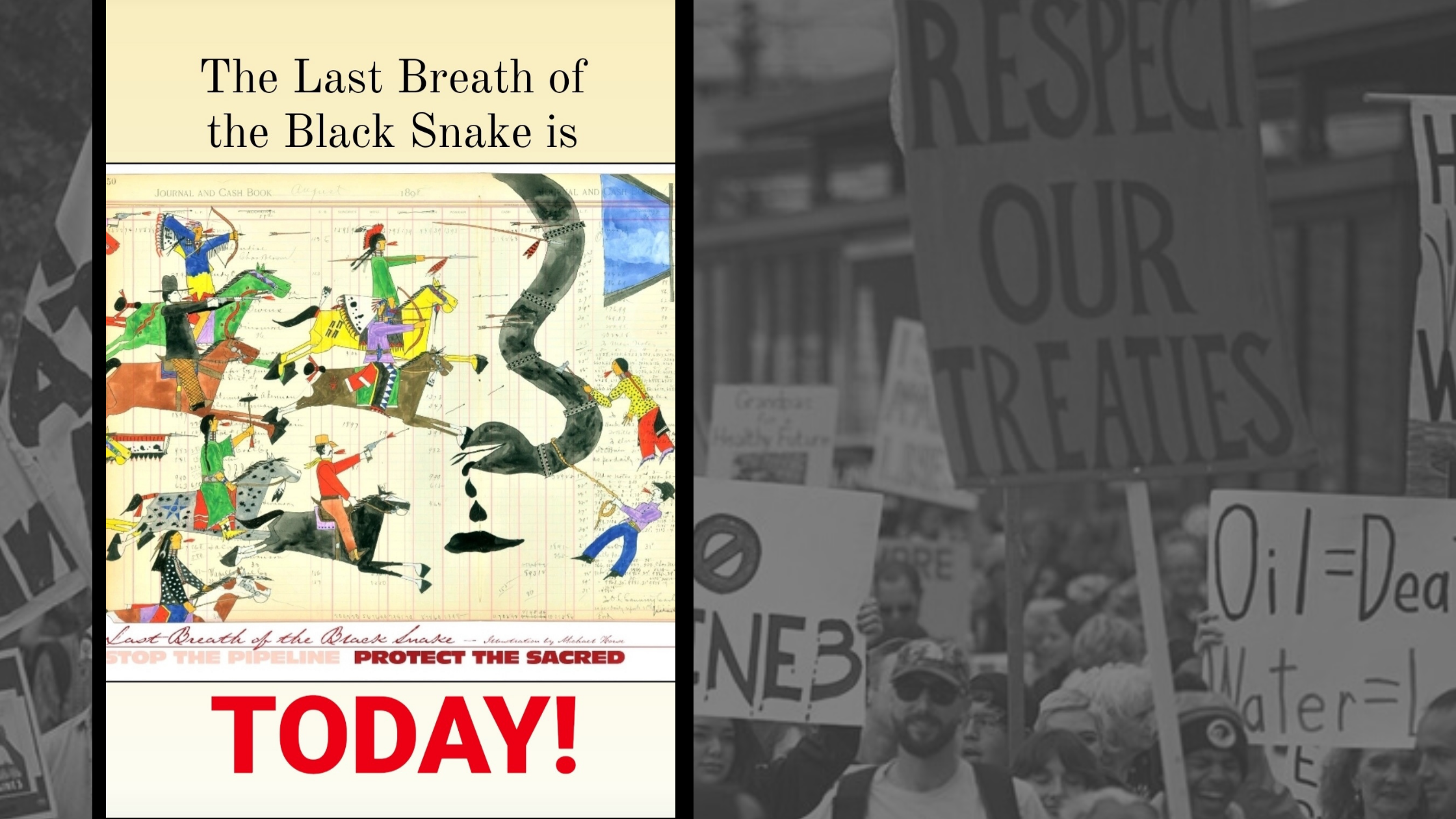 Banner image: “The Last Breath of the Black Snake” painted by Ledger Artist Michael Horse to commemorate the Cowboy and Indian Alliance (2014)

by Casey Camp Horinek. Casey is an Elder and the Environmental Ambassador for the Ponca Nation of Oklahoma and leads Movement Rights Ponca and Indigenous Rights of Nature campaigns.

I congratulate you and Vice President Harris on choosing to launch your Administration by taking some powerful steps for the climate and Mother Earth. Halting the Keystone XL pipeline and drilling leases in the Arctic Wildlife Refuge is a great beginning and we acknowledge that. As Environmental Ambassador for my people, the Ponca Nation of Oklahoma, we appreciate that our ancestral territory and the Ogallala Aquifer is being better protected from destructive oil and gas activities. This is only a small step in the right direction. I urge you to use your Executive power to also end the Dakota Access Pipeline (DAPL) and Line 3 in your first week.

The caretaking of the Earth and Sky is in our hands, for humans are the only species who have defied the laws of Nature in a quest to conquer and own them. We must not only recognize the rights of humans to a clean environment, but the Rights of Nature itself—to evolve, thrive and continue its vital cycles—the Sacred Creation of which humans are only a small part. In keeping with our ancestral knowledge, Indigenous Peoples have stood firmly against the exploitation of the Canadian tar sands. We have laid our bodies on the line when your predecessors approved pipelines from Alberta through our territories—not only the Keystone XL but the DAPL, Line 3 and others.

While we celebrate the end of pipelines as your administration begins, I must acknowledge that the ink of your pen on these executive orders has come from the lifeblood of the Original Peoples, and our allies over many years. At Standing Rock we gathered to pray and to stand before the machines of extraction. We were not paid to be there, and indeed most of our tribal communities live in poverty. We came to stop the DAPL pipeline from going under the Missouri River, to protect the sacred water on behalf of six tribes and 17 million Americans downstream. Many of us faced down police water cannons in freezing temperatures; we were maced, arrested, numbered with sharpie pens on our arms and held in dog cages. My number was 138. My son’s number was 4838. Following Standing Rock, many states passed laws making protesting fossil fuel activities felonies, including Oklahoma. As you know President Biden, after months (and years of work before that confrontation) the Obama administration would put ink to paper to stop DAPL. Tens of thousands returned home, only to find the next administration would reverse course.

What can be done to ensure that your Executive Orders are the last word on these pipelines? Our people shouldn’t have to stand in the cold and pray everyday on the frontlines to ensure the US government stands correct with our Treaty Rights.

Yes, we want you to “Build Back Better,” starting in our communities. We’ve already been leading this environmental justice effort for free. Give us a real green economy. That would be a real start toward correcting 500 years of genocidal policies against the Indigenous people of this land. We are global leaders of green movements, including the Rights of Nature, which provides legal standing for ecosystems in court. My own tribe was the first in the U.S. to recognize that on tribal land, Nature—including people—has the legal right to exist and regenerate its vital cycles.

After so many lies, broken treaties, cultural and historic erasure, we ask you now, “how do we believe in you?” A good start would be acknowledging the real living history of this land and its First Peoples. We are still here. At your Inauguration you could have made a land acknowledgement. A simple statement that as you were sworn in at the Capitol, you stand on occupied land of the Piscataway and Pamunkey peoples. While that inaugural moment has passed, as you travel around what we call Turtle Island, you have many opportunities to acknowledge the people who have lived here for time immemorial.

Of course, this doesn’t erase 500 years of lies and oppression. We will be more comfortable moving forward once Deb Haaland has been confirmed as Secretary of the Interior. She is an Indigenous woman who understands the work ahead to begin to trust and believe in you. Our treaties with the US government include the language “as long as the waters flow and the grass grows.” These words are sacred promises from our ancestors to our future generations. We hope you are ready to make these promises real for everyone who shares this, our land. 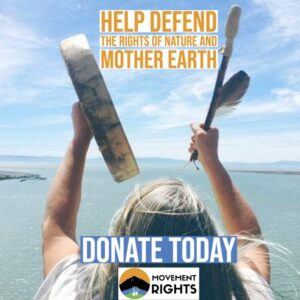 Rights of Nature. Movement Rights is also part of the coalition to #BuildBackFossilFree, aimed at encouraging President Biden to use all the tools at his disposal to avert further climate disruption. Sign the Petition here.

Does Apple, Monsanto or Exxon “owe” America anything?

VIDEO: Official report of the International Tribunal for the Rights of Nature Regarding TIPNIS (Bolivia)