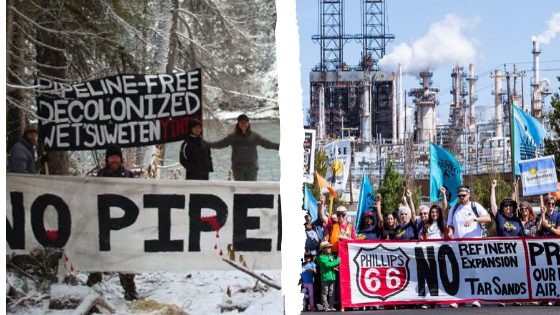 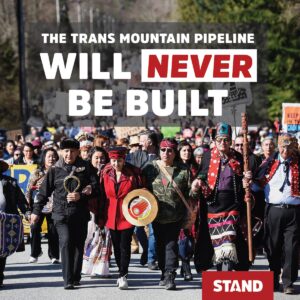 The recent Royal Canadian Mounted Police (RCMP) invasion of Wet’suwet’en territory  is directly related to First Nation’s sovereignty, as well as proposals to dredge San Pablo Bay (the northeast end of San Francisco Bay) and the Phillips 66 wharf expansion in California.  The Wet’suwet’en are a sovereign nation whose territory is unceded and upon which a treaty was never signed with the Canadian government.

Currently, the Wet’suwet’en are being invaded by the RCMP in effort to enforce a Canadian court injunction that would enable the construction of the Coastal Gaslink pipeline (natural gas) through their territory.  Wet’suwet’en hereditary chiefs have long opposed the project. The route of the Trans Mountain pipeline expansion (which was owned by Kinder Morgan and sold to Canada for $4.5 billion) has plans to go through Secwepemc territory, who are also opposed to that pipeline. This is a violation of the United Nations Declaration on the Rights of Indigenous Peoples and the Free Prior Informed Consent therein.

The hashtag #AllEyesOnWetsuweten is also important for Californians who love the San Francisco Bay and are concerned about pollution, refinery emissions and the climate crisis, as tankers of tar sands crude may be headed our way.  If Canada is successful at invading Wet’suwet’en territory and building the Coastal Gas Link pipeline, it paves the way for the Trans Mountain pipeline expansion through unceded  Secwepemc territory (both nations are located within Canadian British Columbia). The Trans Mountain pipeline expansion would nearly triple existing pipeline output from 300,000 barrels a day to 890,000 barrels a day of tar sands (or oil sands), the most toxic and destructive fossil fuel ever extracted.

Trump has instructed the US Army Corps of Engineers to dredge San Pablo Bay to allow over 130 additional tar sands filled tankers into the Bay every year. These oil tankers are much larger than the current oil tankers and would enter through the Golden Gate Bridge to the Phillips 66 Refinery in Rodeo.  Phillips 66 plans on filing a permit for a wharf expansion in order to receive these monster oil tankers.

Tar sands oil has a higher sulfur content than conventional crude.  In 2012, the ChevronRefinery in Richmond, California didn’t maintain a pipe that had weakened to the thickness of a dime from sulfur erosion.  Chevron workers were instructed to patch this weakness repeatedly which resulted in an explosion that sent 15,000 residents to hospitals with respiratory issues.  Many local residents understand that while Chevron invests a tiny fraction of its profits into the community, it also doesn’t care enough about residents to ensure the plant is vigilantly maintained.

There have been four oil spills in the San Francisco Bay recently.  When tar sands oil spills in water it is impossible to completely clean up. The large tar sands oil spill in a tributary of the Kalamazoo Riverin 2010 has never been completely cleaned. Imagine a huge tar sands filled oil tanker having a spill in the Bay. It would damage life in and above the water. How does one clean a bird covered in sticky, toxic tar sands? It isn’t possible.

Tar sands oil is extracted in Alberta Canada in an area that is 54,054 square miles.  According to the National Geographic, “In most of Alberta, the bitumen is buried so deep that wells must be drilled to extract it, and steam injected to mobilize it, at great energy cost. But north of Fort McMurray the bitumen layer is shallow enough that it can be strip mined in huge open pits.   The tailing ponds that hold the “produced water” from mining tar sands are so large they can be seen from space and are some of the biggest human structures made on Earth.  They contain heavy metals and toxins from the bitumen separation process.”  And, they have leaked into the Athabascan River which used to be pristine.

These “ponds” are so poisonous that any animal or bird that comes into contact with the water immediately dies. Because of this there are huge speakers around the ponds that periodically make loud booming sounds to keep animals away, but this isn’t always successful.  There are people employed whose only job is to deal with the dead birds and animals.  In 2013, the tailing ponds covered 30 square miles.  This area has increased since then.

The areas where the tar sands are extracted was part of the largest boreal forest left in the world.  The fossil fuel corporations essentially move into an area to be strip mined and remove the life on the land.  The home of trees, shrubs, medicine plants, birds, deer and other animals in this system of life are gone and in their place are toxins.  The impacts on people and water are devastating with toxic spills into the rivers, rare forms of cancers, auto-immune diseases and miscarriages. 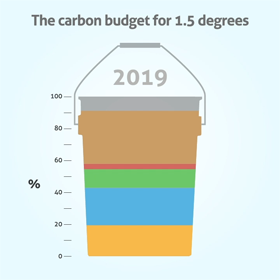 It is well known that carbon emissions are creating climate change and nations must reduce their emissions to ensure that there is a safe, sustainable world.  What is less well known is that the world has used up most of the carbon budget to stay under 1.5 degrees of global temperature rise.  The world’s nations have used up 91% of the budget that would keep the climate habitable.  Moving beyond 100% of greenhouse gas release would lead to a catastrophic climate crisis that would dramatically impact the ability to live on Earth. The world’s nations only have 9% more allowable emissions to keep the climate safe.

Given these hard facts, Indigenous water protectors and land defenders like the Wet’suwet’en and the Secwepemc are not only protecting their territories, but are also providing an example to the rest of us on the importance of keeping fossil fuels in the ground.  Resources spent on fossil fuel infrastructure from mining to transport to refining to the new plastics plants being built, is money that is not going toward real climate solutions like moving toward zero emissions.

It is vital that we pay attention to First Nations’ resistance to fossil fuel pipelines, like the Wet’suwet’en.  Their struggles and resistance are our struggle and we must resist to ensure a safe, sustainable world for ourselves and the next seven generations.  Local groups in the Bay Area working to prevent dredging the Bay and Phillips’ 66 intention to permit a wharf expansion include Idle No More SF Bay, Communities for a Better Environment, Protect the Bay Coalition,and Sunflower Alliance. It is time for all of us to rise for the future we want and not the one that the fossil fuel industry is leading us toward.

Donate to stop the Pipeline! The Tiny House Warriors: Our Land is Home is a part of a mission to stop the Trans Mountain pipeline from crossing unceded Secwepemc Territory. Ten tiny houses will be built and placed strategically along the 518 km Trans Mountain pipeline route to assert Secwepemc Law and jurisdiction and block access to this pipeline.

Pennie Opal Plant is an Indigenous woman living near the Chevron Refinery in Richmond, California. She is co-founder of Movement Rights, Idle No More SF Bay and The Society of Fearless Grandmothers.

VIDEO: Official report of the International Tribunal for the Rights of Nature Regarding TIPNIS (Bolivia)

Support the movement for Rights of Nature and Indigenous rights today