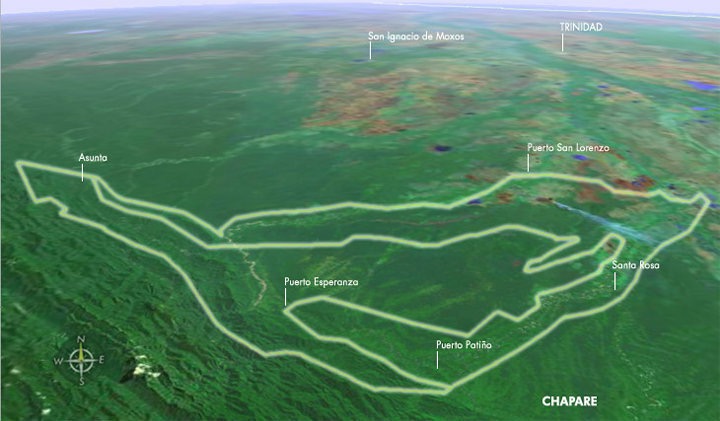 Via the Global Alliance for the Rights of Nature

Cochabamba, Bolivia — Today, the Commission of the International Rights of Nature Tribunal concluded an 11 days long investigation of the country’s highly controversial road project, planned to be built through the heart of the Indigenous Territory and National Park Isiboro Secure (TIPNIS). TIPNIS is a protected area and an Indigenous territory, declared a national park in 1965. This territory holds three Indigenous nations Yu- racares, Moxeños Trinitarios and Tchimanes. Indigenous people within TIPNIS have argued that the road will destroy over 65% of the biodiversity of this lush Amazonian rainforest. ”If this road is constructed, we as Indigenous people, along with our cultures, traditions, relationships with Mother Earth and ways of life will perish forever”, said Cecilia Moyoviri, an Indigenous leader living within TIPNIS.

The objective of the Commission was to meet with community members impacted by the road, NGOs and government officials and to submit a report of findings back to the International Rights of Nature Tribunal. ”In November 2017, the ethical 4th International Rights of Nature Tribunal was held in Bonn, Germany, where we heard the case of the TIPNIS road and the dangers it presents to the Indigenous communities and the Rights of Nature,” said Hana Begovic. ”Part of the Tribunal’s final ruling was to organize a visit by a Commission to investigate the situation and the impacts of the proposed road project on local ecosystems”.

The road is controversial as it will open the access to the heart of TIPNIS, connecting two heavily deforested sectors inhabited by coca producers, thereby giving way to the development of extractive activities and the destruction of a unique area with one of the highest levels of biodiversity in the world. The Commission of Rights of Nature experts represents the growing legal and cultural movement for recognizing legal standing for ecosystems. “We are not owners of nature,” says Shannon Biggs. ”To move toward a planet in balance, we must challenge the idea that Earth’s living systems are property and change our legal and cultural fram- eworks to adhere to the natural laws of the Earth.Recognizing Rights of Nature means that human activities and development must not interfere with the ability of ecosystems to absorb their impacts”. Rights of Nature is now law in seven countries around the world, including Ecuador, Bolivia, New Zealand and dozens of communities in the United States.

Between August 16th-18th, the Commission visited Trinidadcito, where they were welcomed by over 200 local Indigenous community members. ”With open hearts, we heard very powerful testimonies for almost 12 hours”, said Enrique Viale, “including how the road would strongly impact their way of life and the unique biodiversity within TIPNIS”. On August 19th, the Commission attempted to enter the ”Polygon 7” region to have a similar dialogue, but were illegally detained by a group of coca producers for over 6 hours.

”We tried to enter and have a peaceful dialogue with the people in Santisima Trinidad, through a public invi- tation from the Indigenous organization CPITCO and a guarantee for our safety from the Minister of Go- vernment. However, they didn’t let us enter nor leave. When we peacefully asked to leave, they detained us for six hours against our will and violated our fundamental rights”, said Alberto Acosta. The detention became top news in Bolivia and around the world. ”Our detention, and the lack of assistance and reaction from police and government has led to far more widespread interest in the TIPNIS case”.

The Commission had requested to meet with President Evo Morales, but were instead met by the Minister of Government, Vice Minister of Environment and the Vice Chancellor. The Commission said that many of the statements made by the government officials contradicted the evidence presented by the local communities. The next step for the Commission is to revise the information presented to them during this visit, and deve- lop a report to be submitted to the International Rights of Nature Tribunal and key actors of the TIPNIS case, including the Bolivian Government.

The Commission consisted of Alberto Acosta, Ecuadorian economist and former President of the 2008 Con- stitutional Assembly in Ecuador; Shannon Biggs, executive director of Movement Rights (USA) and a global leader of the Rights of Nature movement; and Enrique Viale, a respected Argentinian environmental lawyer, along with the Secretariat of the Commission, Hana Begovic (Sweden).