Chief Seattle once said, “All things share the same breath…How can you buy or sell the sky?”  Today—160 years later—carbon pricing and carbon offsets make this a reality. While the carbon market is often touted as part of a glittering plan to combat climate change, the whole system is about cheating nature while making profits from it. And in places like California, politicians and corporate polluters are betting that by hiding behind bureaucratic jargon (including terms like carbon offsets, REDD, and California’s Tropical Forests Standard) people won’t pay attention. Understanding carbon offsets isn’t as complicated it sounds, but it is more dangerous. And in California, the climate clock is ticking. Wherever you live, here’s what you need to know:

Carbon offsets were put forward as a climate solution by the United Nations.  The goal, proponents said, was to acknowledge that forests naturally capture and store carbon, and that by measuring how much CO2 forests capture, we can put a price on that “service”(carbon pricing).  Once the value of potential carbon storage of the forest has been estimated, carbon credits are issued and sold to rich countries (carbon trading) and big corporations who then use these to offset their existing pollution.

There are many names for the various carbon trading schemes, but they are all based on the same basic formula. Among the largest is the UN’s REDD program (Reduced Emissions from Deforestation and Forest Degradation). Over 80% of the worlds remaining forests are within Indigenous territories. Theoretically, polluters pay indigenous and forest peoples for doing what they already do, protect their forests. However, under REDD, trees in that forest and the air become a form of property. Once part of the carbon market, many forests are then destroyed and converted to tree farms, destroying biodiversity and displacing Indigenous peoples from their traditional land. Some forest peoples receive minimal payments through these schemes, while others receive no benefits. Some forests have been commodified even though the Indigenous communities were not consulted or refused to consent to projects in their territories. REDD and other carbon projects are already resulting in loss of land and threatening the cultural survival of Indigenous peoples. All of these factors have contributed to a growing unrest between tribes who have agreed to carbon offset schemes and those who are against the commodification of their forests.

So, how does the carbon market help solve climate change? It doesn’t.  It’s a climate Ponzi scheme, a carbon shell game.

In a state like California, where environmental standards and climate goals are considered high—rather than actually reduce their carbon footprint, industrial polluters can simply buy carbon credits.   As Pablo Solon, former Bolivian climate negotiator to the UN explained in Movement Rights’ 2016 climate report, “In theory, REDD provides a monetary incentive for not deforesting. In actuality, corporations purchasing credits [offsets] can release into the atmosphere the amount of CO2 they paid for. In other words, carbon credits are polluting permits for the rich.” 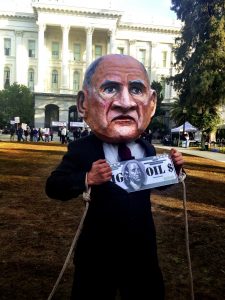 On September 5, 2018, the California Air Resources Board (CARB) released a draft California Tropical Forest Standard (TFS), followed by a 191-page Draft Environmental Analysis the following week.  TFS is a new name for  California’s own REDD project, a decade-long cap-and-trade scheme launched by the  Governors’ Climate and Forests (GCF) Task Force. TFS includes a loophole for the oil industry, allowing California’s biggest polluters to continue business as usual.  So while California corporations appear to be cleaning up their act, Californians continue to suffer the pollution at home while far away forests and Indigenous communities are being harmed.  And in the world of politics-as-optics, the illusion that something is being done about climate change while the reverse is true, creates public complacency.

California’s outgoing governor, Jerry Brown, has long perpetuated the myth that he is a “climate leader”, obscuring the fact that his stated climate goals stand in sharp contrast to his actions and cozy relationship with the fossil fuel industry.

As investigative journalist Dan Bacher notes, “Oil produced in California is some of the dirtiest and most climate-damaging crude oil in the world…In fact, during the Brown administration, more than 20,000 permits for new drilling have been issued.”

In light of the recent UN IPCC report’s warning that we have 12 years left to address climate change, carbon trading schemes like TFS and their loopholes for Big Oil and Gas are effectively climatological death permits.  Letting Big Oil spew pollution while hoping tropical forests can suck it up is NOT a climate solution…yet the California Air Resources Board (CARB) is proposing just that.

Idle No More SF Bay, a group of Native Americans and allies, was one of many groups who have written formal  letters to the California Air Resources Board in advance of CARB’s November 16 public meeting in Sacramento to discuss the TFS. In their letter they warn, “All carbon trading mechanisms must be left behind in light of the new IPCC report, especially the Tropical Forest Standard (TFS) that the CARB Board and staff are considering now.  These mechanisms do nothing to reign in the fossil fuel industry at a time when we now know that allowing this industry to continue to add tons of carbon dioxide to the atmosphere will lead to catastrophic climate disruption.”

The Idle No More letter also speaks to concerns about the integrity of the TFS process, including urging tribes to sign on to TFS without full information of the impacts, “Members of the Yurok tribe in California, whose leadership signed a forest offsets contract, were not made aware of the entire spectrum of what that contract means with regard to continued fossil fuel emissions, climate and the health impacts which communities suffer like those along the refinery corridor in the East Bay.  The fact that these impacts of the Yurok contract were not shared with tribal members violates the Free and Prior Informed Consent as directed by the United Nations Declaration on the Rights of Indigenous People.” 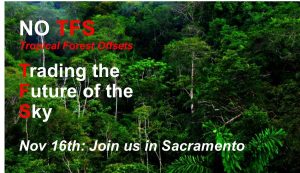 dozens of concerned groups from across California and nationally for the CARB meeting.  Indigenous leaders from affected regions in the Ecuadorian and Brazilian Amazon, Mexico and elsewhere will also be in Sacramento to denounce the TFS and give public testimony about the impacts in their region. Yurok tribal members, and residents from places like Richmond, California—home to several refineries including Chevron—will share how TFS will allow polluters to continue to destroy the air here in California.  The public is encouraged to attend.

Climate Colonialism & The Rights of Nature 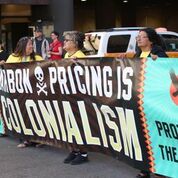 Many indigenous communities still live subsistence lifestyles, and rely on their sacred relationship with the Earth to provide what is needed.  But the ongoing onslaught of timber, oil, mining, dams and other extractive projects have taken their toll on forest dwellers. Indigenous tribes have often worked together to fight oil companies and other development projects in their territory. And yet it has been the push for carbon trading that has created some of the widest divisions between the people and their land, between neighboring tribes and among tribal members. Even families have been painfully split apart.  Some who oppose TFS, REDD, and other offset schemes have received death threats.

A big part of this division comes down to the fact that carbon trading is a powerful form of colonization—the latest wave to hit tribes beleaguered from decades of fighting extractive industries.  By signing on to these agreements, a sacred relationship with the land is broken and is replaced by a relationship of commerce.

“For my people, the forest is sacred, it is life in all its essence. We can protect Pachamama only if this is respected. REDD and other market mechanisms have turned our relationship with forests into a business.” – Marlon Santi, of the Sarayaku Quichua community of Ecuador

Many who have signed on to the agreements are unaware that in so doing, they have condemned other communities elsewhere to suffer with continued pollution.  Some know, but reluctantly sign on because their communities are living in poverty and sickness they feel helpless to heal.

The Sarayaku people are among those tribes who have continued to oppose carbon mechanisms. In July 2018 they launched Kawsak Sacha, (the Living Forest) proposal, which reaffirms their interconnected relationship with their forests, water, and spirits.  Kawsak Sacha proposes the permanent protection of native land, free of extraction and commodification, based upon the ideas that the forest itself is life, with spiritual rights that could be upheld by Ecuador or other international entities like IUCN (International Union for the Conservation of Nature).

Rights of Nature is also based on Indigenous cosmology and the ideas that the Earth is a living system of interdependent beings. “Nature has its own rules that govern its integrity, interrelationships, reproduction and transformation, and these rules have worked for millions of years,” says Pablo Solon. “States and society must respect and assure that rules of nature prevail and are not disrupted. This means we need to recognize that our Mother Earth has also rights.”

Climate change itself is the Earth’s demand for human system change; it is a wake up call to shake off old ways that got us here, and to create vibrant local living economies respectful of the living cycles of Mother Earth and Father Sky. It means shifting the legal landscape that has propped up industrialization by treating ecosystems as property to be owned and destroyed. The rights of nature is system change and it is happening around the world. Legally recognizing the rights of ecosystems to exist and flourish provides a new way to protect the health of ecosystems—including the air—and providing nature legal standing in a court of law.

The rights of nature are violated by these carbon pollution contracts. But rather than mourn the loss of political leadership on climate change to the peddlers of extractive capitalism, it is time to acknowledge where the real power to create change lies, with us.  No matter where we live, we share the same air.  And wherever there are corporations participating in cap-and-trade and carbon offsets, we can stand up.

In 2018, the Ponca Nation of Oklahoma, an area devastated by oil extraction exacerbated by carbon offset schemes, became the first tribe in the US to recognize the rights of nature. As Ponca Tribal Councilwoman and Movement Rights board member, Casey Camp Horinek says, “Putting the Rights of Nature into tribal law is for us, putting indigenous cosmology into the Western Legal system for the first time. This is OUR law.

“All things share the same breath…How can you buy or sell the sky?” These contracts for carbon offsets can be stopped, and we can enforce a system of law based on how the system of life works.  We can align human law with the laws of the natural world.